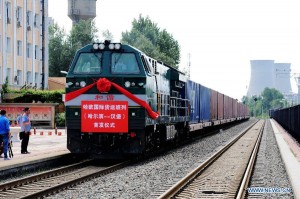 A freight train service between the northeastern China city of Harbin and Hamburg was launched a few days ago, opening a new trade route between the country and Europe. The first train left the railway station in Harbin carrying 49 containers of domestic goods such as electronic products and auto parts from northeast and north China, worth 3 million US dollars. During the 9,820-km-long travel, the train will pass Russia and Poland before reaching Hamburg. The train will be run once every week and each single trip takes 15 days. It will transport goods from China, the Republic of Korea and Japan as well as European countries such as Germany, Poland, France, Spain and Italy.