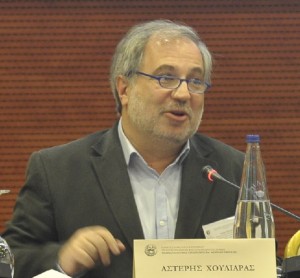 As long as the rise and development of China continue, the need of writing books dealing with this issue is growing. Attempting to respond to the new challenges, Professor of Comparative Politics and International Relations at the University of Peloponnese Asterios Huliaras co-edited recently – along with Dr Sotiris Petropoulos – the book China and the Others: Relations of China with Europe and the World. In an interview he gave to chinaandgreece he concentrates on the content of the book but he also talks about initiatives strengthening research cooperation between Greek and Chinese institutions. Moreover, he analyses the current status of Sino-Greek relations and joins the public debate on motivations driving China to demonstrate a systematic interest in Greece.

What is the main content of the book China and the Others?  Why did you decide to publish such a book?

Along with Dr Sotiris Petropoulos I have co-edited the book China and the Others: Relations of China with Europe and the World which was recently published by Papazisis Publishing House. It includes chapters written by 14 Greek researchers from various universities and research institutes. Although there are many notable Greek books on the history of China and its relations with the West since 1949, we found that there was a lack of books analyzing contemporary international relations of China in the Greek literature. Taking into account that the undergraduate Program of the Department of Political Science and International Relations at the University of Peloponnese includes a relevant subject, such a textbook was necessary.

But I think that this book is not only a good textbook. Its chapters provide a systematic analysis of the relations between China and the United States, Europe, East Asia (Japan, North Korea, Taiwan, ASEAN), Africa and Greece. It additionally includes chapters on internal components of foreign policy, energy dependence and environmental policy. Research conducted in our Department is of course not only connected with this book. There are important publications at the international level such as a recent article in Asia Europe Journal on the dynamics of Sino-Greek relations, doctoral theses in progress and major research projects. These are either funded by international organizations (e.g. The Jean Monnet Chair on EU’s Relations with Less Developed Countries) or by private actors mainly aiming at promoting Sino-Greek economic relations.

What is the objective of the consortium you have created?

Additionally, we are setting up various research projects. The Consortium, however, is not a ‘closed club’. Although six actors have started the initiative, it is open to any official organization having similar objectives. We want to join forces to promote the co-operation of Greek researchers with China. We are a small country. We cannot afford fragmented initiatives. We want to strengthen initiatives and coordinate actions.

What is your view on the current status of Sino-Greek relations? Do you think that the Sino-Greek co-operation is placed with the context of Sino-European relations?

There is high potential for policies and actions benefiting both China and Greece. COSCO’s investment is a tangible example. The large current account deficit is an existing problem. Greek exports to China have increased but their amount is small in relation to imports, although these imports have been reduced due to the economic crisis.  Demand in China is currently increasing because the Chinese government has realized that its national economy cannot be only based on exports. This is a window of opportunity for Greek companies. Nevertheless, the approach has to be systematic, patient and obstinent as the Chinese market cannot be easily accessed. Some Greek entrepreneurs expect to attract new customers by organizing a short-stay visit in Beijing. By contrast, a co-ordinated, long-term effort is required.

Co-operation between China and Greece is heavily influenced by Sino-European relations. This has both a positive and a negative dimension. On the one hand, China would hardly invest in Greece if the country was not a member of the EU.  On the other one, the arms embargo does not help the Euro-Chinese approach. Member-states have often different views on relations with China. Some countries concentrate on the trade deficit and propose protectionist policies, others try to attract investment, others refer to the issue of human rights and others are prepared to lend political support to Beijing in exchange for closer economic cooperation. These different perceptions and attitudes hinder the efforts of the EU to develop a common foreign policy towards China. This has also implications to Sino-Greek relations.

What are the main reasons for the continuing co-operation between Greece and China? Do you see a win-win approach?

The relationship can be certainly a win-win one. Greece needs Chinese investments and China is highly interested in accessing the European market. But we should have no illusions. The relationship is mainly an economic one. ‘Geopolitical plans’ and a‘strategic approach’ logic are arguably on the agenda. Chinese companies, whether they are public or not, operate on the basis of profit. Their motivations are hardly related to cultural proximity or to recommendations by the Ministry of Foreign Affairs. Market economy marks their modus operandi. As far as Greece is concerned, private interests primarily drive the bilateral relationship. Ship owners play the most important role and define the dynamics of the partnership. They first became active in China and they are closely co-operating with the other side. Cultural exchanges, political agreements and official meetings are  of special importance of course. However, the main field of co-operation is the economy. Relevant investments and trade deals cannot but bring profits.