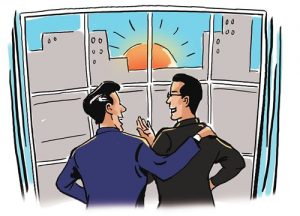 On the very same day Chinese President Xi Jinping was giving his keynote address at the Belt and Road Forum for International Cooperation, Emmanuel Macron was sworn in as the new French president. Therefore, the two leaders did not have the opportunity to meet in person for the first time in Beijing, but perspectives for the future are bright. Almost immediately after his victory against the leader of Front National Marine Le Pen, Macron received a congratulatory phone call by Xi.

The conversation confirmed mutual interest in close cooperation. Three years ago China and France commemorated the 50th anniversary of the establishment of diplomatic relations. The Sino-French relationship was reaffirmed as a “full partnership” in the Joint Statement in 1997 and rose to the level of a “comprehensive strategic partnership” in 2004. As Xi said to Macron, the comprehensive strategic relationship can be pushed to a higher level.

The new French president realizes the importance of China in world affairs. More importantly, he has shaped his international approach by studying Chinese history. In interviews with some media organizations – namely Le Parisien and RTL – before the election, he had referenced former Chinese leaders Mao Zedong and Deng Xiaoping with esteem. “I am a Maoist” he had, inter alia, asserted. With this educational background and as a former investment banker, Macron must be keen on improving ties with China.

Moreover, France has shown a high interest in participating in the Belt and Road initiative. Last February, both sides signed agreements on nuclear energy and science during former French prime minister Bernard Cazeneuve’s Beijing visit. The mutual collaboration on the Hinkley Point C nuclear power plant program in the UK is certainly the flagship of recent cooperation. Since 2011 Beijing and Paris have agreed to strengthen their nuclear engineering network and cooperation is expected to deepen and expand in the future.

Other areas of cooperation are evident. Tourism and trade will dominate the agenda in the coming years. Following Xi’s speech at the Belt and Road Forum, France can be one of the countries benefitting from China’s intention to increase its imports as well as its emphasis on people-to-people exchanges. Speaking three years ago in Paris, the Chinese president underlined that “over the past five decades, two-way trade has increased by over 500 times from the early days of [the establishment of] diplomatic ties.” He also talked about the approximately two million mutual visits each year between the two nations. These numbers are only expected to increase following his recent pledge.

Sino-French partnership goes beyond pure bilateral interests. Both China and France are permanent members of the UN Security Council. Both share the same responsibility to provide solutions and answers to global challenges and problems. One of the first priorities for Xi and Macron will be to keep the Paris climate accord alive as US President Donald Trump indicated that his country might pull out. Other issues are equally critical and include the fight against terrorism and the promotion of an open and inclusive international trade system. France’s commitment to respect its UN obligations is underscored by the visit of Secretary General Antonio Guterres at the Élysée Palace almost immediately following Macron’s inauguration.

Furthermore, Macron’s victory can provide temporary calm and relief to the EU. For the next four years, France and Germany will have the opportunity to discuss specific measures and possible treaty changes guaranteeing the survival of the EU, including moving toward a more flexible structure. Macron and German Chancellor Angela Merkel agreed to coordinate their actions in their Berlin meeting.

This is good news for China. The Chinese government counts on the continuation of the European integration project and endorses initiatives contributing to its stability. A second international shock after last year’s Brexit would require an immediate readjustment of priorities.

All in all, the new French president will uphold friendship toward China. A young politician who is a supporter of the One-China principle, is knowledgeable about the country’s history and current politics and is aware of the changes the EU urgently needs, possesses some basic characteristics which at least guarantee continuity and go hand-in-hand with Beijing’s interests. Subsequent high-level bilateral meetings will set the basis for more progress.