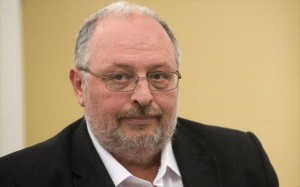 Greece’s Alternate Minister of Defense, Kostas Isychos, met with a delegation of the ‘China North Industries Corp’ (NORINCO)* company on Wednesday 6 May at the Greek Ministry of Defense. The Greek Secretary General of the Ministry Ioannis Tafyllis, was also present along with other officials. The meeting revolved around the cooperation of the Greek Ministry of Defense with NORINCO. As Mr. Isichos said to chinaandgreece.com ‘the outcome was excellent’.

‘Greeks and Chinese are very much alike in their temperament,’ he also said and added that Greece is a country of major geopolitical importance ‘located in a critical position and being a bridge between Europe, Asia and Africa; a bridge between West and East. Based on that we would like NORINCO to develop further in our country towards our mutual benefit.’ Furthermore, the Alternate Minister asserted that Greece’s Prime Minister Alexis Tsipras has been invited to China. When the visit will take place the Greek Ministry of Defense will benefit by having yet another meeting with NORINCO, and advancing the talks for further cooperation in the national security sector.

Finally, Mr. Isichos talked to chinaandgreece.com on the improvement of Sino-Greek relations and argued: ‘relations are developing and are currently in a good place. Willingness for further co-operation has been declared and there are major opportunities that could result from this.’