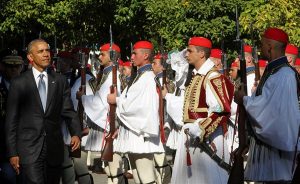 The last two months of Barack Obama’s presidency will not be ideal and harmonious for the charismatic leader. The defeat of his preferred candidate, Hillary Clinton, in the U.S. presidential election puts a bitter end to his hopes to find a successor. The transition period until the inauguration of Donald Trump in January 2017 will be difficult not only because he and his wife, Michelle Obama, had taken an open position against him in the pre-election campaign but also because some of his policies might be reconsidered in the future by the Republican politician.

Obama’s most recent visit to Europe – namely to Germany and Greece – is taking place at a stage during which transatlantic relations are marked by a spirit of solidarity. In spite of some disagreements – for example, on the role of American intelligence services and spying charges as well as some different priorities for the conclusion of TTIP – the U.S. and the EU have experienced a period of close collaboration and mutual understanding. Obama deserves a credit for this success. His predecessor George W. Bush ignored the principle of multilateralism, being almost solely responsible for the serious crisis in transatlantic relations from 2002 until 2008. From January 2009 onwards, the 44th U.S. President restored America’s image, contributed to a decline of anti-Americanism and largely respected Europe’s views.

Obama’s Europe trip contains a strong symbolic meaning. He’s visiting the strongest and weakest countries in the Eurozone, sending a clear message regarding the need for unity and preservation. The U.S. and Germany have contradictory views in dealing with the debt crisis. The former believes in the need of growth, a greater role of the state and fiscal stimulus, while the latter advocates for extended austerity along with difficult structural reforms. The German approach saved the Eurozone, as Berlin has been the driving force behind unprecedented EU decisions providing a lifeline to bankrupted countries in exchange for painful measures. Nonetheless, this method has caused some dramatic results. Greece, a victim of continuous cuts in salaries and pensions as well as tax rises, has lost approximately 25 percent of its GDP in a period of six years and sees no light at the end of the tunnel.

The interpretation of the current situation by Obama is based on an amalgam of economics and geopolitics. On the one hand, he is attempting to put pressure on Germany to lay more emphasis on growth and spending as well as to accept a mild restructuring of Greece’s debt, and on the other hand he sees the integrity of the Eurozone as a critical element of American strategy in the Eastern Mediterranean. As long as Greece is suffering, its stability cannot be taken for granted. Washington seeks to prevent an additional turmoil in a neighborhood – the Balkans and the Middle East – where peace and democracy are often undermined.

This U.S. approach goes hand in hand with China’s interests. Greece is a key country in China’s Silk Road strategy. The investment of COSCO in the port of Piraeus also signals an acknowledgment by the Chinese administration of Greece’s critical geopolitical significance. This said, both the U.S. and China want Greece to stay in the Eurozone and for scenarios of uncertainty to be removed.

However, the current period is a highly sensitive one for Chinese investments in Europe. Irrespective of Greece, the EU and some other European countries – including Germany – have recently started to show skepticism. A few days ago, for example, Germany withdrew approval for the €670m takeover of chip equipment maker Aixtron by a group of Chinese investors. A debate is flourishing on whether funds provided by businessmen from China should lead European companies to sell their know-how, especially in technology.

All in all, Obama visit to Europe is taking place amid fears of a deterioration of the transatlantic partnership. The President of the European Commission, Jean Claude Juncker, calls Trump “ignorant of the EU and its workings.” But Beijing should not immediately expect a deterioration. By contrast, it first needs to focus on straightforward repercussions of the U.S.-EU constraints in their trade with China. Particularly worrying is the fact that the new U.S. President might be prepared to exert a strict line.