Panteion and Fudan universities to possibly co-operate on social sciences 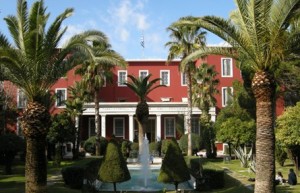 The debate started with a brief presentation of Fudan University which is a leading university in China on various disciplines such as the study of social sciences. In that regard, the School of Social Development and Public Policy produces high quality research being one of the most energetic and international schools in Fudan University. Following this short presentation, the three Chinese guest speakers focused on the course of social sciences in China in recent years as well as on some of the most important findings. The participation in the  planning in the ‘211 Plan and the ‘985 Plan’ has been one of the most important success. As Naran Bilik said during the debate: ‘Research on social sciences is inevitable in order to deal with contemporary challenges stemming from the globalization and the continuous change of the social correlations’.

More importantly, representatives from Fudan University and Panteion University discussed the possibility for further co-operation between Chinese and Greek universities and research centers in the area of social and political sciences. Such a cooperation can certainly benefit by the current momentum as several institutions in Europe and China have started to develop collaboration projects. Pan Tianshu highlighted prospects for the future by saying: ‘A cooperation in the sector of social sciences between the superpowers of Research and Development will produce impressive results that could have a positive impact in the exercise of public policy”.