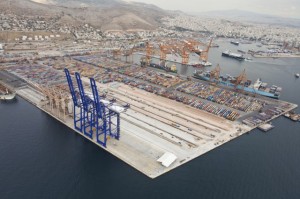 International shipping has welcomed the emergence of maritime China whereas Greece has proudly maintained its position as one of the world’s biggest maritime powers.  The commercial linkages between Greece and China, known as two of the world’s oldest civilizations, have become increasingly important since the period of Chinese economic liberalisation, when the two maritime powers were drawn together, and has continued to grow during the recent Greek debt crisis, when the Greek government admitted in 2009 its budget deficit. Whilst China has assumed its role as one of the world’s economic superpowers, Sino-Greek relations were deepened and strengthened. The Port of Piraeus, the largest port of Greece and a hub of international shipping in the Eastern Mediterranean, has been on the forefront of this process and the business, political, cultural and most of all maritime relationship between Greece and China.

The Port of Piraeus has played a vital role, especially for transit trade, since its geographical position is a nodal point. In addition, it is the southern European gate for Asian goods being transferred towards the Balkans and the Black Sea. Piraeus’ strategic advantages have enabled Chinese investors and in particular China Ocean Shipping Company (COSCO) to invest on the reconstruction of the Port’s Terminals, providing an unlikely tight bond between China and Europe. China has been investing heavily overseas. Beijing is particularly interested in Greek ports, airports, infrastructure, railways and energy knowing Greece’s important role in bridging the East with the West and vice-versa. However, whether Greece will keep playing the intermediary role has been brought into question after the newly elected Greek government, headed by the leftist party Syriza, stated that the planned privatization of the Port of Piraeus will be cancelled against the creation of an oversees, non-unionized Chinese colony, like they have mentioned in the past before their election.

The Deputy Minister of shipping, which like 2009 has been combined together with economy, infrastructure and tourism, Mr Thodoris Dritsas, said last week that the “COSCO deal will be reviewed in the interest of Greek people” and he added that COSCO will remain the main candidate for the port’s majority stake since it has already signed a 35-year concession. The news of a possible renegotiation of privatization deals between the Greek and Chinese governments have obviously alarmed the Chinese Ministry of Commerce. In particular Mr Shen Danyang, the spokesperson for China’s Ministry of Commerce, urged “the Greek government to protect the legitimate interests of Chinese companies in Greece, including COSCO”. In addition to Mr Dritsa’s comments, Minister Giorgos Stathakis, who himself comes from a shipping family, said that the new government will respect the contract with PCT SA, the bilateral cooperation will continue and finally the latter will hopefully be and mutually enhanced. Mr Shen Danyang seems to agree with Mr Giorgos Stathakis from that perspective and finally made clear that “the Ministry of Commerce will continue to closely monitor the direction of relevant policies of the new Greek government”.

The adoption of a completely new attitude towards China by the newly elected government happens to coincide with the construction of the third container terminal in an attempt to increase the port’s capacity. Pier’s III inauguration ceremony took place just a few days before the Greek elections. Greece’s previous Prime Minister Antonis Samaras underlined the importance of the 230€ million investment to increase the port’s annual capacity. Although Piraeus has been regarded as a natural gateway for Chinese products, nonetheless, for China a possible scenario could be to seek for new business partners in Europe but such an outcome could possibly harm Piraeus’ international competitiveness. Moreover, China has also signed an agreement with Serbia, Hungary and Macedonia in order to upgrade the railway transport connecting Belgrade with Greece through Budapest and Macedonia. After the completion of the project China will be able to transfer goods directly from the Port of Piraeus to the rest of Europe since 50% of Chinese trade is transferred by the Greek-owned merchant fleet and on top of that 80% of Chinese imports and exports to and from Europe are being transferred through Piraeus via the Suez Canal. Towards the creation of the New Maritime Silk Road this project is a win-win for both Greece –Maritime Silk Road’s west end- and China.

The importance of course of Chinese trade has become significant in the emerging global order whilst Europe is becoming China’s major trading partner and Piraeus has been developed as China’s leading partners, a relationship dating back to the period of Chinese political, economic and maritime reforms when China started abstaining from the Leninist political structure, but has more recently taken off that China became an engine of economic growth. The announcement of China’s 13th five-year plan has already made clear their need to stabilize their economic expansion and growth in the West. A possible setback in Chinese investments would not harm China at all, bearing in mind that China has huge foreign currency exchange reserves still to invest around the world. Foreign Ministry spokesperson Miss Hua Chunying during the regular press conference on January 30, in regards to the new Greek government fulfilling its obligations she mentioned that “the Chinese side hopes and believes that the Greek government would honour its commitment [and] stay committed to enhancing communication and cooperation with the Chinese side on the COSCO project at the Piraeus port […]”.

What can be said with certainty is that the election of Syriza has also raised lots of questions in the circles of Greek shipping. Greek shipowners have traditionally had a good relationship with whoever was the party of the government of the day from the times of Aristotle Onassis and Stavros Niarchos. Greek shipping tycoons have always counted on Greek governments’ backing with favourable terms and a liberal tax regime. If the new government wishes to impose heavy taxes and actually not cooperate with Greek shipping firms that would obviously cause disappointment and negative reactions. According to a letter sent by the President of the National Confederation of Hellenic Commerce (ESEE) Vasilis Korkidis to the new Prime Minister, he lists ESEE’s suggestions to be taken into consideration by the new government in the interest of the Port’s development and the people of Piraeus. In his letter Mr Korkidis has addressed a number of issues as it follows; to improve the current institutional framework for the operation of shipping and trade; to create a new freight centre in Thriasio, which has been substantially delayed; to reorganize shipping companies; to further develop the cruise sector and create a “homeport” in Piraeus; to examine the incentives for the development of shipping “cluster”; to consider the revival of Shipbuilding activities and that of the Ship Repair Zone; and finally and most importantly to have no awkward interruptions in the beneficial for the Greek economy investments in the Port of Piraeus.

On January 22nd at the first Naftemporiki Shipping Forum most speakers, among which some of the most prestigious Greek shipowners were present, talked about the restoration and stabilization of the port’s competitiveness, in addition to a competitive institutional framework, Greek flag’s competitiveness, transparency and openness. In order to create a competitive environment for both the shipping companies and for the economy in which they operate, there is an urgent need for concentration of cluster members in Piraeus, the creation of strong links with the associated industries and higher degrees of innovation. Very cleverly, the President of the Union of Greek Shipowners Theodore Veniamis commented on the new Greek Prime Minister’s plans to re-examine the institutional framework and tax exemptions for shipping by saying that “the future of shipping is not in doubt […] but the crucial question is who will manage shipping and from where?”. The Union of Greek Shipowners has not made any formal comments yet but will probably do so next Wednesday after its scheduled general assembly.

On a closing note, Greek shipping interests are not particularly or exclusively concentrated in the suburbs of Athens or the Port of Piraeus. Greek shipping assets are borderless and if the Prime Minister decides to impose heavy taxes and refuses to cooperate then there would have a strong possibility for Greek shipwowners to move their companies and operate them from abroad!