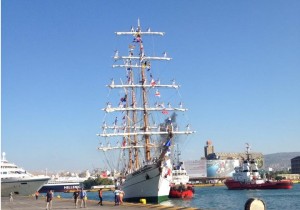 ‘ARM Cuauhtémoc’, a Mexican Navy sailing ship, arrived on Monday 3 August 2015 in the Port of Piraeus. It will remain in pier 12 of E-11 Gate until 11 August and the general public can visit it free of charge. ‘ARM Cuauhtémoc’ cruise is named Levante Mediterráneo 2015 and reminds the important historical comminication routes placed in this east basin of the Mediterranean. These include the ancient Phoenician routes, the Silk route and the maritime route towards East through the Suez canal. The  Navy ship departed on 25 April from Mexico and will return to the country on 11 November passing from countries like Greece, Turkey, Spain, Britain, Ireland, France, Malta, Puerto Rico, Nicaragua, Guatemala and Panama. As ‘ARM Cuauhtémoc’ Commander Captain Surface Warfare Pedro Mata Cervantes  said on chinaandgreece.com , ‘Piraeus has completely responded to his expectations’. 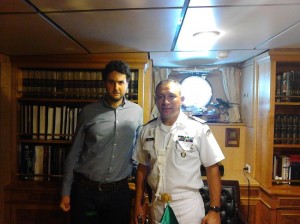 The Embassy of Mexico in Greece has organised an amazing ceremony for welcoming ‘ARM Cuauhtémoc’ in Piraeus.