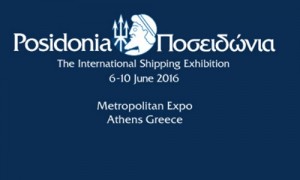 The organisers of Posidonia, the world’s most prestigious maritime exhibition, have confirmed a 15 percent growth in size for this year’s event, as the committed total of over 40.000 square metres of exhibition floor space together with a record 40 conferences and new sporting events make the 2016 edition the biggest in the event’s almost 50 year-long history.

Over 1.800 exhibitors from 89 countries, including China, will participate at Posidonia 2016 which opens its doors on June 6 for a week that will see intense networking and business dealing between the world’s most prominent shipping industry executives who will converge at the Athens Metropolitan Expo for the biennial maritime show. In total, some 20.000 visitors are expected to walk the ambient halls and corridors of the state-of-the-art venue which every two years becomes the global hub of attention for an industry which carries around 90% of world trade. The gravitas of Posidonia and its reputation as the most important shipping event is mainly owed to its status as the home of Greek Shipping, who control some 20 percent of the world’s dwt tonnage.

“The growth of Posidonia is the result of the resilience of the Greek shipping industry which has managed to cope with the current challenging conditions and maintains its leadership position thanks to its entrepreneurial spirit and by continuously upgrading and reinventing its product,” said Theodore Vokos, Executive Director, Posidonia Exhibitions S.A., during a press conference to mark the launch of the 25th edition of Posidonia.

Currently, the Greek-owned fleet’s average age is 11,2 years and comprises 4.585 ships, representing 19,63% of the global fleet in dwt. “In spite of fierce international competition, Greece’s ocean-going shipping sector maintains the highest ranking in the world and we continue to expand as our current newbuilding order book contains 350 ships under construction,” said George D. Pateras, President of the Hellenic Chamber of Shipping, during the official Posidonia Press Conference.

Theodore E. Veniamis, President, Union of Greek Shipowners, said: “Posidonia is here to project in the best possible way the significance of the shipping industry and the indispensable service it offers to international trade and the world economy. This impressive exhibition is equally a clear manifestation of Greek shipping’s invaluable contribution to the national and the EU economy.  At a crucial period for the Greek economy and under adverse conditions stemming from both global market pressures and misguided recent EU policy approaches, Greek shipping maintains the first position internationally with 20% of the world deadweight capacity and 50% of the EU fleet, and proudly hosts the most prestigious shipping trade event internationally.”

Charalambos Fafalios, Chairman of the Greek Shipping Cooperation Committee in London, said: “Even though Greece is still valiantly trying to recover from many years of difficulty, its shipping industry is flying the flag and showing the ingenuity and foresight that makes Greek shipping the leader in most bulk shipping markets. Though many sectors of the shipping industry itself are going through painful adjustments, the positive attitude shown by the shipping industry means that it will not only survive but ultimately prosper. We believe that the government should continue to support the efforts of the maritime industry in every way possible because without its maritime heritage Greece would not be the proud country that it is.”

But there are also challenges ahead as John C. Lyras, Chairman of the Posidonia Coordinating Committee, pointed out: “Despite the deepest and continuing economic crisis since Greece joined the European Economic Community (as it was known at the time and comprised 9 member states) in 1981, Posidonia 2016 is the most prominent yet. There can be no more eloquent acknowledgment of the Greek shipping community’s success and dynamism than this. A community that comprises almost half of EU shipping and which contributes significantly and annually to the Greek and EU Maritime cluster and economy.

A community, moreover, which the European Commission is strangely and hopefully inadvertently proposing to seriously undermine through its investigation of Greek shipping’s longstanding legal and taxation framework. As is evident from the impressive size and scope of this year’s Posidonia, this framework has been singularly efficacious.”
Nevertheless, the leadership position of the Greek shipping community and its continuous fleet renewal programme are the catalysts that attract the world’s shipping industry suppliers and manufacturers to Posidonia to showcase and market their offerings.

A record of more than 200 shipyards led by traditional shipbuilding nations, China, Japan and South Korea, will hope to attract the attention of the owners of the world’s largest fleet at an event synonymous to newbuilding deals.
More than 80 Information and Communications Technology (ICT) firms will vie for a slice of the smart vessel wave that has engulfed operators due to regulatory changes and the need for improved performance. And from specialist shipping suppliers, such as ballast water management and propulsion system providers, to service providers from the travel, health, safety and education sectors, the premises of the exhibition will once again buzz with the aura of global shipping’s brightest brands and minds. Pateras saluted the participation of this wide ranging group of service and product providers as “the Hellenic Chamber of Shipping continuously supports developing technological achievements which comply with international maritime safety regulations and protect the marine environment.”

And thanks to the 40 confirmed presentations, seminars and workshops delving into the global maritime community’s prime focus, strategic priorities, issues and concerns, the Posidonia 2016 Conference programme will be yet another reference point offering more reasons to visit for decision-makers, high ranking executives, analysts and the media from around the world.

Many of them will take advantage of the Posidonia Games, the ultimate networking platform comprising trademark sailing, football, golf and running events that are scheduled on the weekend leading up to the opening of the exhibition. In total, over 2,500 shipping industry professionals from all over the world have registered to participate in the Games, a concept which has helped prolong hotel night stays for many Posidonia exhibitors and visitors further boosting revenues for Athens’ hospitality sector and further fueling overall Posidonia spending across the city’s transportation, catering and entertainment sectors, which is estimated at Euro 60 million for the duration of the exhibition.

Posidonia 2016 will be held from June 6 – 10 at the Athens Metropolitan Expo. The event is organised under the auspices of the Greek shipping community and the five major associations representing Greek shipping interests: Ministry of Maritime Affairs & Insular Policy, Municipality of Piraeus, Hellenic Chamber of Shipping, Union of Greek Shipowners, Greek Shipping Cooperation Committee, Hellenic Shortsea Shipowners Association and Association of Passenger Shipping Companies.