The eradication of poverty remains highest priority for China 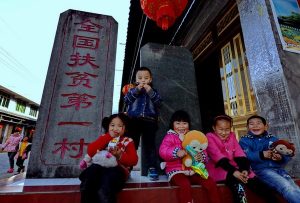 Every year, the international day for the eradication of poverty unites world leaders in seeking to show tangible progress and create prosperity for citizens without discrimination. Some data, however, isn’t very encouraging, even for developed countries.A recent Eurostat survey shows approximately 119 million people (23.7 percent of the population) in the European Union were at risk of poverty or social exclusion in 2015. Although this is a slight decrease in comparison to previous years, it is still higher than in the pre-financial crisis period. Greece, Cyprus, Spain and Italy have the biggest problem due to the dramatic consequences of austerity measures. If the situation in developed countries can prove problematic, it is apparently even more complex in developing ones no matter how they measure poverty. The case which subsequently deserves particular attention is that of China for two main reasons.

First, the country has the largest population so that the numbers facing poverty can easily become headline-making. According to World Bank data, China had 1.371 billion inhabitants in 2015 followed by India with 1.311 billion. Second, however, the country has already made an enormous contribution to poverty reduction and this performance constitutes a model for its own future policies as well as an example for other states. A new White Paper provides useful numbers. Specifically, more than 700 million Chinese people have been lifted out of poverty over the past three decades. In addition, the proportion of people living in extreme poverty fell from 61 percent in 1990 to 4.2 percent in 2014. The 2015 Report of the UN Millennium Development Goals makes special reference to the “central role” played by China in global reduction of poverty. That is because the country had met all relevant UN objectives including the achievement of gender parity in primary schools and the increase of access to clean drinking water.

Steady development of several sectors of the national economy and the implementation of market-oriented reforms were the keys to this success. The systematic effort of the Chinese administration to eradicate poverty has also led international bodies to study its potential applicability to other cases. From 2009, for instance, the UN World Food Program argued that steps taken in China in the past could help reduce hunger in developing countries. The Organization for Economic Co-operation and Development (OECD) published a study one year later drawing on lessons for African countries from China’s experience in transforming agriculture despite major historical and geographical differences.Several scholars have also elaborated on similar comparisons in their research and this theme has become familiar in academic journals.

However, this is not the right time for triumphalism or relaxation. The mission of the Chinese government has not been accomplished yet. In fact, more work needs to be done as approximately 70 million people still live under the poverty line. President Xi Jinping is committed to completely eliminating the problem by 2020. The 13th Five-Year Plan includes measures addressing social imbalances and protecting rural residents. Relocation to urban centers will continue. Moreover, local administrations have a big responsibility to share the economic burden while the central government keeps up spending.

Specific measures themselves as stipulated in the 13th Five-Year Plan are certainly important for the government to keep its promises. These measures also reflect Beijing’s will to implement the 2030 Agenda for Sustainable Development. Premier Li Keqiang focuses on this goal last month in New York on the margins of the UN General Assembly.However, what is perhaps even more important is the existence of a vision for the future that can inspire people. As long as the “New Normal” is marking the course of the Chinese economy, a different type of growth must be pursued.

Quantity gives way to quality as consumption, protection of the environment and innovation become fundamental parameters of Beijing’s economic strategy. There is no better investment for the next decade guaranteeing affluence than the efficient education of the younger generation. Knowledge and qualifications will be critical for the long-term improvement of living condition within the continuously modernizing Chinese society.