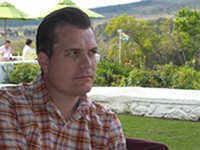 Professor in International Relations and African Politics at St Andrews University and Chair Professor in the School of International Studies at Renmin University of China, Ian Taylor, came recently to Athens to participate at a conference organized by  the Department of Political Science and International Relations of the University of Peloponnese, Sciences Po of Bordeaux University and Hellenic African Studies Network . On this occasion, he shared his expertise on China with chinaandgreece. Professor Taylor attempted to explain how Chinese companies operate in Europe and Africa as well as to analyze the ‘peaceful development’ concept. He also talked on Sino-Greek relations, the impact of the European debt crisis on China’s policies and the need to enrich knowledge on China in Europe.

The crisis has allowed Chinese companies and corporations to become involved and buy quite cheap assets. The port of Piraeus in Greece is an example. However, I think it is important not to confuse Chinese corporate interest with China’s foreign policy. These corporations are going to Europe to make money. To be more precise , I do not think that China’s purchase of a part of the port of Piraeus has been some sort of  Chinese expansion. It is more just a commercial enterprise. I think that China is also interested in managing the airport of Athens.

The majority of Chinese activities in Africa, for example, seek to make money and profits. It is not about foreign policy. Chinese aid and Chinese investments are two different stories. The Chinese government is often involved in Africa in helping to create conditions which are favorable for Chinese corporations to invest. But the decision of the Chinese companies to invest is purely a commercial decision based on profits. It should not be seen as a part of a foreign policy decision. This can be also the case for Europe.

Since the reform period and  in the last 15 years, Beijing is much less able of controlling corporations. But also at the political level,  provinces, mainly the rich ones, have now greater power. Shanghai, Guangdong and Zhejiang provinces are characteristic examples. These are very powerful parts of the country. The centralized state cannot be always capable to control the influence of Chinese actors and corporations abroad. Therefore, I do not see Chinese commercial activity overseas as a part of a strategy or a plan by Beijing at all

Should Europeans learn more on China?

Every country needs to develop its own expertise on China. I think that most of Europeans are behind in terms of their knowledge on China because of language barriers. Language is important, since you need to develop a group of academic experts, who know how the Chinese system works, how the economy works etc. In order to do that properly, Chinese language is a necessary prerequisite. To sum up, all European countries should invest in learning more on China. But they do not. In Britain, for example, the number of Chinese experts is very small. So, I can imagine that in Greece or somewhere else it is even smaller.

How do you assess China’s peaceful development concept?

The concept demonstrates how sensitive the Chinese leadership is. It does not want to be accused as hegemonic or as a growing threat to the international system. At the beginning, they had adopted the term ‘peaceful rise’ and then they changed the label to ‘peaceful development’. The idea is that peaceful rise gave an impression of a threat, so the country could be theoretically considered as a challenge to the international system.

China is more concentrated on building its own economic system, on transforming the country and becoming very strong as a global economic player. It wants to keep the thing relatively quiet. In Deng Xiaoping’s era policy had been quiet. So, the idea of peaceful development is part of China’s strategy the nature of which is currently peaceful.

How do you see China’s role in the world?

China is becoming more and more powerful economically. This gives Beijing political strength and influence. I think that what is interesting, at the moment, is that China is very reluctant to use its economic muscle at the foreign policy level. China is obviously interested in its local neighbors, i.e. in South China Sea. Furthermore, it sends naval ships of the People’s Liberation Army to Africa to protect Chinese investments and to Somalia to protect shipping there. But until recently China’s was very quiet.

As concerns its political power, China does not use it at the moment, unless it is an issue it is worried about. For a long time China has been accused to be a free rider i.e. it takes advantage of the system without really contributing to the system too much. Bearing in mind that it is a member of the Security Council – if you can compare its foreign policy and its activity with France, Britain and of course other states- you will see that China is very much reluctant and quiet. I think that this can change now. The new leadership of Xi Jinping seems much more active. He wants to develop his role into a strong leader for China. When I was in China a few weeks ago some academics focused on his assertive policy and elaborated on how this could have an effect on relations between China and its neighbors such as Japan. Tensions in South China Sea are not rare for example.

How do you see the evolution and improvement of Sino-Greek relations?

Chinese corporations obviously see Greece as an opportunity. They can get things cheap in Greece now due to the economic crisis. The geographic location of Greece is strategic as an entry point for South-Eastern Europe. Greece has a great long shipping tradition. I mainly connect the Chinese will to buy more assets in Greece to existing economic opportunities. The investment pattern will partly remain the same in developing and in developed regions. In Africa it is all about natural resources. In Europe governments and the legal framework are stronger. But the bottom line is that China is looking for profitable bases to invest.