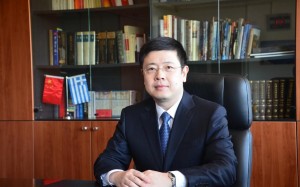 ‘Today’s eurogroup and EU summit are critical for the future of the eurozone and the EU and will have a significant impact on Greece. At this decisive juncture, Prime Minister of China Li Keqiang expressed – on behalf of the Chinese government – the support for unity and a crisis solution for the eurozone, the EU and Greece.  This stance constitutes another example of the Comprehensive Strategic Partnership between China and the EU as well as between China and Greece. Premier Li Keqiang will go to Brussels next week to attend the 17th China-EU Summit. His relevant statement sent a positive message that China is prepared to intensive its communication and co-ordination with the EU on important issues in order to boost the mutual co-operation and pave the way for creating sustainable growth not only for each side but also for the world economy.

From the beginning of  2015, our governments have intensified their contacts and meetings at all levels. China has offered sincere assistance to Greece to overcome current difficulties. The two countries have announced the beginning of Sino-Greek Maritime Co-operation Year while new developments have taken place in shipping, maritime industry, science, technology and tourism. China positively assesses its deep friendship with Greece and the active role of the latter in safeguarding peace and stability in the region and promoting dialogue and exchanges between different cultures.

We hope and believe that Greece will overcome the crisis and achieve its rebirth. A success of Greece will be also a success of the eurozone and the EU. This success will contribute to the the deepening of Sino-Greek and Sino-European relations benefiting peoples in both countries’.