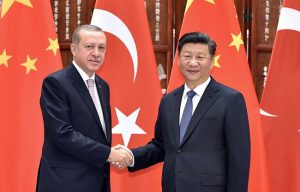 This year marks the 45th anniversary of the establishment of diplomatic relations between China and Turkey. Two significant partners and powerful emerging economies – with a long history – are currently looking for ways to give new impetus to bilateral cooperation.

The economic data certainly seems promising. In 2015, the volume of bilateral trade reached US$27.27 billion. Although China enjoyed an impressive surplus, this volume is indicative of the role of commerce bringing the two sides closer. China is the third largest trade partner of Turkey, following Russia and Germany.

As it often happens, even between allies, political obstacles can overshadow harmonious economic collaboration. In a remarkable example, Ankara had to reconsider its initial decision to order an anti-missile defense system from China after facing serious pressure from fellow members of NATO.

This was not the only case where the two countries were at odds. Perhaps the most complex issue is Turkey’s toleration – if not outright support – for Uyghurs living in the Xinjiang region of western China.

China has often suffered from terror activities perpetrated by Uyghur militant groups. Therefore, the fundamental priority of its government is not only to block similar atrocities in the future, but also to prevent the training of Uyghur separatists by Islamist fighters in the Middle East.

The recent suicide attack in China’s Embassy in Kyrgyzstan shows the risk. According to local authorities, the attack was ordered by Uyghur militants active in war-torn Syria and carried out by a member of the East Turkestan Islamic Movement (ETIM).

During the recent G20 Summit, Turkish President Tayip Erdogan responded to Chinese concerns when he met with his Chinese counterpart Xi Jinping. He pledged to take all necessary measures and practically restrict the illegal immigration of Uyghurs from China into Turkey.

Although many Turkish citizens express some sympathy with the Uyghurs due to their Muslim faith and underlying Turkic culture, Erdogan has decided to follow the path of realism. The Ottoman Empire had supported the Muslim revolt in western China under the Qing Dynasty. However, conditions differ nowadays.

The natural question is whether Erdogan will keep his promise. The experience of his management of the refugee crisis along the Greek-Turkish border demonstrates that Turkish authorities can be remarkably effective when they want to be, or are instructed to act.

Specifically, in the aftermath of the EU-Turkey deal last March, Turkey has blocked a number of migrants attempting to leave the country and reach Greek islands. Before this deal, while Ankara was bargaining with Brussels on the relevant terms, the refugee crossings went ahead with almost no Turkish resistance.

There is also another reason why the signs are rather positive. Since the failed coup of July 15, Erdogan has embarked on a multidimensional foreign policy, which sees Turkey seeking to improve its relations with Russia, Israel and partially with Egypt.

The Turkish president is smart enough not to frustrate China in a period when he is looking to restore stability and attempt to escape from international isolation. In this context, China is a valuable partner for Turkey not only diplomatically but also as a foreign investor and an exporter of technology.

Ankara has possibly learned from its mistakes in the Syrian civil war. Irrespective of its steely resolve to fight the Kurds, it is certainly determined to eliminate terrorism, principally the Islamic State which has been blamed for several terror massacres in Turkey.

Although the popularity of the Turkish president domestically is on the rise since July 15, it might take a downturn should terrorist attacks continue.

All in all, as Erdogan said to President Xi at the Hangzhou Summit, Turkey will not allow anyone to use its territory to harm China’s security. This will be the springboard for pushing the bilateral relationship to new heights. It is no coincidence that China and Turkey have signed an agreement for the mutual development of nuclear technology with the Chinese side interested in building a third nuclear plant in Turkey. The two countries are similarly interested to explore additional collaboration opportunities in energy, coal, renewable energy and agriculture.

Last but not least, the evolution of China’s “Belt and Road” initiative will also yield win-win results. The recently concluded Kumport terminal deal – the Chinese purchase of 65 percent of the port operations near the mouth of the Bosporus for US$1 billion – shows how interconnection in Eurasia is being synthesized both on land and at sea.

Such investment and joint business schemes, however, can hardly be sustainable if they are not protected from the insane action of terrorists of any description.