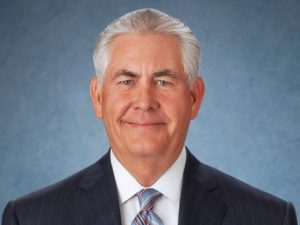 Rex Tillerson is Donald Trump’s personal selection for the position of the Secretary of State. Tillerson’s position as CEO of Exxon Mobil is a direct confirmation of the importance energy and economics play when foreign policy is exerted. He will take the new position – after an expected approval by the Senate – having a long-standing experience in signing business deals with world leaders, mainly in countries where his company is operating.

The head of an energy colossus, however, is not automatically qualified to steer a country’s foreign policy where balanced diplomatic moves and careful political decisions are required. In the case of Tillerson, this becomes more important as Trump himself is also a businessman without day-to-day experience in politics. Subsequently, analysts across the globe are attempting to anticipate how the American foreign policy will be shaped from January 20 onwards.

It has been almost a commonplace observation to link Tillerson’s appointment with relations between the U.S. and Russia. Trump’s relatively friendly approach vis-à-vis Moscow can be better implemented by Tillerson than by Mitt Romney, who was another candidate for the position of Secretary of State. Romney, for instance, is traditionally negatively inclined, while Tillerson enjoys excellent relations even with Vladimir Putin. Putin personally awarded the head of Exxon Mobil with Russia’s Order of Friendship medal in 2013.

Nothing should be taken for granted, however. It is too early to suggest that a new chapter in the relationship between Washington and Moscow will open in 2017. Such a development would signal the beginning of a different world order, especially when taking into account the deep rivalry of the two sides over Ukraine and Syria. The American establishment – including several Republican politicians in Congress and media organizations – are skeptical of Trump’s stance and could raise serious objections. For the time being, the president-elect is being heavily criticized for his apathy in investigating the alleged Russian interference in the U.S. election. Also, the terms of a potential rapprochement are unknown. Putin has proven to be a hard negotiator in recent years and will need to receive specific guarantees before coming to agreements with a country he does not trust.

Instead of being reserved, however, some commentators tend not only to predict Putin’s alignment with the West under the leadership of Trump and Tillerson but also to analyze additional repercussions. It is here where the case of China appears in the media discourse. Α recent article in The Guardian was titled: “Some other friends forever? China wary of Rex Tillerson wooing away Russia.” The main argumentation is that the theoretical collaboration between the U.S. and Russia might jeopardize the Sino-Russian partnership. The supposed explanation is that Putin will have to make difficult choices between turning his country’s foreign policy towards the West or towards China.

Even if Τillerson manages to facilitate a better political understanding between Washington and Moscow, the relationship between Beijing and Moscow will hardly be influenced. To start with, there is no Sino-Russian “axis” against the West. The fact that China and Russia closely co-operate does not mean that they seek to repudiate the U.S. and the EU or that they are building an anti-Western military and political alliance. Also, the economic grounds of Sino-Russian collaboration are unquestionable. Russia needs China as a reliable client for its natural gas. The bilateral May 2013 energy deal is a characteristic example. For its part, Beijing needs Moscow for the smooth implementation of B&R Initiative in several Asian countries. In other words, the win-win logic cannot be easily altered.

From another perspective, Tillerson is not only familiar with Russia but also with China. He has come across Beijing’s interests in South China Sea following ExxonMobil’s decision in 2009 to sign a contract with Vietnam for gas drilling. He also regularly travels to China in order to expand his company’s presence in the country. According to its official website, ExxonMobil has an upstream, downstream and chemical business presence in China. In July 2016, for instance, Tillerson visited China to hold a meeting with Wang Yilin, chairman of China National Petroleum Corporation. Furthermore, Bloomberg reports that he has rarely commented directly on the South China Sea or on broader China matters, cultivating expectations for a cautious media strategy in a period during which journalists are often keen on inciting tensions.

There is no question that Trump’s presidency might partly lead international affairs into unchartered waters. But there is no indication or suspicion that his will to cooperate with Putin will impact the Sino-Russian partnership. By contrast, Tillerson’s appointment as U.S. Secretary of State and that of Terry Branstad for the position of the U.S. Ambassador to China demonstrate that – apart from some initial tactical moves – Trump will not alone or spontaneously risk pushing towards a new balance of power against Beijing.