Rhetoric of President Xi: China’s Return to the ‘New Normal’ 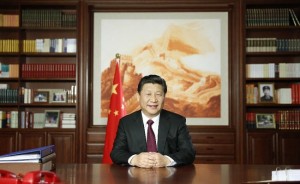 Just hours ago, President XI Jinping, China’s most powerful leader, delivered the New Year speech live on national TV. As usual, he lamented the happy and sad moments of the past year, showed sympathy to those in sorrow home and abroad,  emphasized the significance of the remarkable achievements under his administration, stressed the inconvincibility of the great nation of China, raised new hope in the wake of yet another promising year, and ended the speech on a cheerful note. The English transcript was immediately released on-line for multiple interpretations. However, unlike the seemingly plainness of the English rendition, his original speech was way more interesting in terms of diction and delivery.

In a democracy, election has become more than an event that’s held every four years or shorter, but a reality show with running commentaries, not only on TV, the Internet, your social network, traditional newspaper, but also on the day to day human communication, small talks by the water cooler, or even a meant-to-be pleasant family get-together that eventually wind up with anger-loaded political debate. A candidate depends more and more on his or her social image, whether consistent or not, than political stance and concrete ideas of running the country. As Neil Postman argued in his Amusing Ourselves to Death, politics is getting manipulated by the social image. The line between politics and social image is becoming increasingly blurred. And we are not talking about super star Mr. Reagan or Mr. Schwarzenegger who might never have been able to address their “fellow Americans” without the help of the cameramen.

President Xi has got some state-of-the-art cameramen. From his posture at the reception of the leaders from Asian-Pacific countries during the APEC meeting, to the stern face for his misbehaving Japanese counterpart in the G20 meeting, President Xi is more expressive than his predecessors. In this New Year speech, President Xi took the folk style of expression every now and then when he celebrated government officials who “have also spared no efforts performing their duty”(the original sentence employed a popular daily expression, “蛮拼的”) and when he “salute(d) our great people” by click the “like” icon (the original sentence used “点赞”). His rhetoric  resonates with his popular image as the “leader of the people”, or a “dynamic strongman”. What’s more, the nostalgic romance of him and China’s First Lady Peng Liyuan, a well-beloved folk song singer, has stirred strong emotional echoes among young people in China.

However, there’s more than meets the eye. The dynamic image of President Xi has helped him entrenched his power within the country and the Party. His personal soft power has sheltered him from strong political rebound when it comes to the take-down of corrupted officials, senior executives of state-owned-enterprises, and some of his former comrades. His resolves to “both deepen the reforms and strengthen the rule of law” which, as he put it, should function as the two wings of a bird, or as wheels on both sides of a vehicle, have won him nationwide support, especially from the lower ranks of the society.

China’s rapid economic growth comes to a slowdown as the statistics showed recently. A mild aim of GDP growth rate of 7% for 2015, which for some is still unimaginable, is said to be hard to achieve. The whole nation is fascinated by a word, the “New Normal”. However, what’s more important than fuzzy statistics and imported jargon is a paradigm that is pragmatic and down to earth. And the first sign of such a paradigm is the rhetoric of the political leaders. Unlike situational leaders such as Mr. Mikhail Gorbachev, or charismatic leaders such as Mr. J.F.Kennedy, what China needs now is a transitional leader, someone like President Xi who, while exaggerating to respect the “tradition”, calls a spade a spade to keep the country on the right track. His partnership with Premier Li Keqiang has been met with wide acknowledgement as the reality shows his anti-corruption movements wiped out obstacles for deepening economic reform which is Premier Li’s main field of responsibility.

This combination of politics and economics may constitute a “New Normal” for China. As Albert Hirschman argued, all rapid growth is unbalanced growth. The economic imbalance generated by significant structural change of an economy is always intertwined with political struggles and mismatch of powers and interests. In the process of rebalancing, China will have to go through a readjustment period where vested interests are disrupted in order to create room for new growth points, as Chinese call them “增长点”. In the present sense, the vested interests in China are the interests groups that widely exist in groups of princelings, executives of state-owned enterprises, regulators in the financial industry, and self-interested government officials of almost all levels. To deepen the economic reform, room for political maneuver is necessary. When President Xi claimed that China’s capable of controlling the risks of economic reforms, it cannot be taken out of the political context.

Against this backdrop, with a new plan of “One Belt, One Road”, President Xi is not to be met with a cold shoulder.