The appointment of Terry Branstad 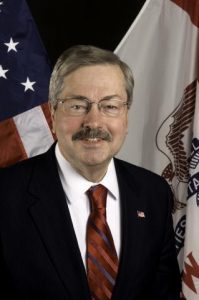 Sino-American relations will be of utmost significance during the forthcoming administration of Donald Trump. In this regard, the role of specific persons such as the U.S. ambassador to China can be certainly auxiliary towards an allegedly new course in the bilateral relationship. If there is a common element in the analysis of Trump’s perspective policies, it is the unknown consistency between past words and future deeds. This is obviously the case with his theoretical strategy vis-à-vis China. Undoubtedly, a good understanding between the new U.S. administration and Beijing is a sine qua non parameter for the beginning of a relatively good chapter in their relations from January 20 onwards.

Trump has already made his decision about the new U.S. ambassador to China. Iowa Governor Terry Branstad will succeed Max Sieben Baucus who was Barack Obama’s nomination in February 2014. Trump is relying on Branstad’s qualifications and experience in government. More importantly, he values the personal relationship between his new ambassador and Chinese leaders, including President Xi Jinping. Trump was quoted by the New York Times as saying that Branstad “knows them all.”

A lawyer by training, Branstad started his political career in Iowa in 1972 and was its longest serving governor from 1983 to 1999. After working for some years as President of Des Moines University, he returned to Iowa politics in 2009. He managed to be re-elected as governor one year later and also in 2014.

Xi Jinping met him for the first time in 1985, when a Chinese delegation visited Iowa to study agricultural practices. Twenty-six years later, in 2011, Branstad travelled to China and met with Xi – then Vice President of the country. The year after, Xi went for a second time to Iowa. The visit aimed at boosting trade cooperation but also reflected some nostalgia and emotionalism. Meetings between the two have also taken place during Xi’s presidency. In September 2015, for instance, they met on the occasion of the Third Annual U.S.-China Governors Forum and Dialogue. At that time, Branstad stressed the “long lasting friendship [of Iowa with its] sister state Hebei and with President Xi.”

The initial climate after the announcement of Branstad’s new position has been promising. In particular, he portrays Xi an “old friend.” And the spokesman of China’s Ministry of Foreign Affairs, Lu Kang, regards him an “old friend of the Chinese people” and possibly expects a greater role from him in advancing Sino-American relations.

Another important element following Branstad’s appointment has been the reaction within American politics. In a period during which Trump has largely divided the domestic political spectrum, Branstad remains a respectable figure even among Democrats. U.S. Agriculture Secretary Tom Vilsack praises his attitude for being “tenacious.” Additionally, former Under Secretary of State Robert Hormats believes the nomination is “a good pick” because “it creates a personal relationship that is very hard to replicate.”

Branstad’s new job will be particularly hard. This is because the 45th U.S. president has been vocal against China in economic and trade affairs. Theoretically, an ambassador has little room for personal diplomacy when government lines are strict. However, Trump’s policies have not been specified yet. This will possibly give Branstad an opportunity to discuss with Trump the negative effects that a “trade war” with China might entail. The governor of Iowa and future ambassador very well knows the significance of bilateral trade. His state has been shipping agricultural products such as soy to China for years. Furthermore, he was the pioneer for the signing of several commercial accords between companies in the two countries. In September 2015, for example, more than 12 contracts for soybeans and health products were signed.

Experience from recent history suggests that U.S. presidents, who are not experts in foreign policy, are largely influenced by their advisors. This said, Branstad’ mission might go beyond that of a typical ambassador serving in a foreign country. Above all, Trump himself seems determined to trust some key positions to experienced politicians irrespective of his continuously eccentric public comments.