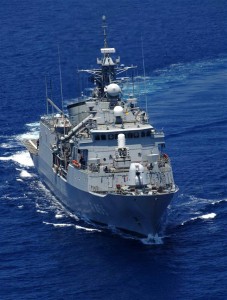 79 Chinese nationals in total safely arrived to the port of Piraeus. This is not the first time that Greece helped Chinese nationals but the fourth one. Specifically, the country contributed to the evacuation of Chinese citizens from Albania in 1997, from Lebanon in 2006 and from Libya again 2011. The recent rescue operation started when the Greek frigate reached the Libyan capital, while the Chinese government chartered the ship ‘Eleftherios Venizelos’ in order to participate in the operation.

On the same day, Ambassador of China to Greece Mr Zou Xiaoli welcomed his fellow citizens in the port of Piraeus and congratulated the commander of ‘Salamis’ for his crucial role.Chinese citizens who welcomed their compatriots in Piraeus expressed their joy with banners mentioning: ‘Thank you, Greece’ and ‘Hooray the Greek-Chinese friendship’.

This adventure has given the opportunity to many Chinese citizens to know more about Greece and its citizens. While sometimes the sea outlines the distance between countries, it brought – in this case – China and Greece even closer highlighting the strong foundations of the Sino-Greek friendship.