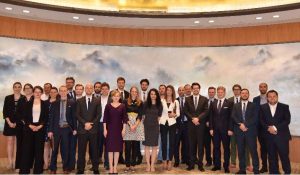 The Second Workshop for European Young Leaders was successfully convened in Beijing and Zhenjiang. Organised by China Diplomatic Academy under the auspices of the Ministry of Foreign Affairs the workshop gives the opportunity to 28 delegates from several European countries to exchanges views with the Chinese diplomats, businessmen and scholars on the role of China in the world and Sino-European relations. Greece is represented by Dr George Tzogopoulos, founder of chinaandgreece.com.

On the first day of the programme European young leaders discussed with Chinese scholars the process of financial cooperation under the Belt and Road initiative and mainly its main characteristics and current impact. They offered insights on China’s involvement in their own countries and made comparisons in order to discuss whether their interpretation of the initiative is similar. Special emphasis was given to new perspectives after the May International Forum of Cooperation on the Belt and Road. Subsequently, they visited Huawei company and familarised themselves with its new innovation platforms as well as the concepts of smart cities, e-security, and e-health. Later, they visited Diaoyutai Guesthouse, the place where important summits and meetings are taking place in the Chinese capital. They include, for instance, the six-party talks. 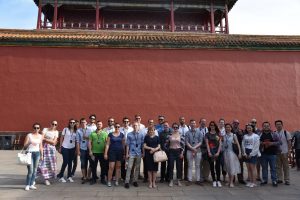 The European Young Leaders in the Forbidden City

On the second day, European delegates visited China’s Ministry of Foreign Affairs. The main purpose of the visit was to discuss the results of the recent EU-China Summit organised in Brussels. Chinese diplomats briefed them on the importance Beijing attaches on the continuation of European integration. Themes of discussion included the impact of Brexit on China’s approach towards the EU and the room for closer collaboration between China and EU following the decision of US President Donald Trump to withdraw from the Paris Agreement. The main conclusion was that in spite of existing differences both sides are interested in continue their dialogue in order to enhance their partnership and seek common ground. 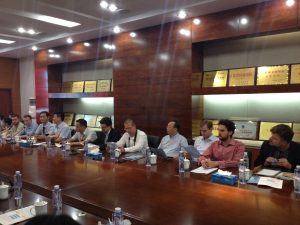 On the third day of the programme, European delegates discussed China’s attempt to adapt through innovation to new standards of green energy and low carbon usage. In the aftermath of US President’s Donald Trump afore-mentioned decision they saw that China remains committed to this accord and seeks to improve environmental conditions, acknowledging the existing problem. The delegates later travelled to Zhenjiang where they met with municipal officials and discussed the possibilities of future collaboration between this Chinese cities and other European cities. Common issues of interest include investments, trade, tourism, shipping and education. Also, potential sister-cities accords might be on the agenda.

Zhenjiang sits on the southern bank  of the Yangtze River, which forms a ‘Golden Cross’ with the Beijing-Hangzhou Grand canal in the city. Staying in Zhenjiang for three days the European young leaders saw how the city is investment-friendly and boosts innovation research. The fourth day of the programme included visits in Daqo company and the Vinegar Culture Museum. The fifth day saw them visit Huilong E-town International Logistics and Retech Digital Industry Park as well as the Sino-Swiss Industrial Park and Zhenjjiang Dalu General Airport. Before departure on the sixth day of the programme, the delegates visited the Zhenjiang City Planning Hall and the ancient Xijin Ferry.