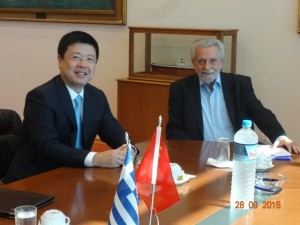 Greek Shipping  Minister Theodoros Dritsas gave an interview to the Sunday edition of Kathimerini and journalis Elias Bellos. As Mr Dritsas said he is keen to negotiate with the preferred bidder (COSCO)  in the sale of Piraeus Port Authority in order to ensure more benefits for the state and to safeguard labor relations in the company. Additionally, Mr Dritsas explained that the Greek government will sign the concession contract with COSCO , but noted that Parliament could introduce additional provisions to make sure the investment will have a social dividend and added value for the economy.

In particular, the Greek Shipping Minister said: ‘We will secure this through deliberations [with COSCO]], a process that both I and the government believe has to be put to good use. If we reach an agreement, this can then be rubber-stamped in a variety of ways. This negotiation has not begun, though I have called for it’. He also asserted: ‘The concession contract can be revised and it is in this context that the Drapetsona zone was excluded from the agreement on the prime minister’s initiative’.

You can access here the original article of the Sunday edition of Kathimerini.