In an exclusive co-operation with People’s Daily,

“We are going to punish violators with an iron fist who destroy the ecology or environment, without exception,” said Chinese President Xi Jinping, while reviewing the work report of the State Council together with National People’s Congress (NPC) deputies from Jiangxi Province on Friday.Xi said that environmental protection is key to ensuring the livelihood of the people, imploring citizens to care for the environment as “one’s own eyes and life.”

His remarks echoed China’s government work report for 2015, which said “environmental pollution is a blight on people’s quality of life and a trouble that weighs on their hearts. We must fight it with all our might.” This year’s government work report pays unprecedented attention to ecological and environmental protection. For the first time, it put forward that China will cut the intensity of carbon dioxide by at least 3.1 percent.

“As a responsible member of the international community, China has made great efforts in cutting carbon dioxide and other greenhouse gas emissions,” said Wang Yi, director general of Institute of Policy and Management, Chinese Academy of Sciences. He noted that cutting carbon dioxide and other pollutant emissions would spur enterprises to improve technology and strengthen management, both of which are key to upgrading industrial operations.

“To achieve sustainable development, we must optimize the energy structure. The fundamental way is … to promote economic transformation and upgrading. The new requirements for carbon reduction are actually the new driving force,” said Zhang Hui, mayor of Weihai in East China’s Shandong Province.

“The implementation of the new law improved law enforcement and laid a good foundation to combat illegal activities and crimes against the environment,” said Gao Jixi, director general of Nanjing Institute of Environmental Sciences of the Ministry of Environmental Protection.

In recent years, China has made significant progress in its efforts to repair the environment. Forestation in China reached 90.41 million mu (6.03 million hectares) in 2014.“Ecological and environmental protection is closely related to people’s livelihood,” said Gao. “Nature is of great value. China should pay attention to investing in natural capital and accumulating green wealth,” Wang said, adding that as long as positive measures are taken, China will usher in a bright future of ecological and environmental protection. 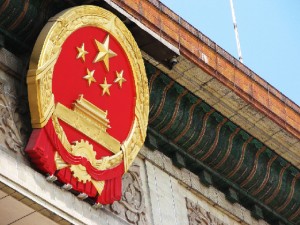 A draft revision to China’s Legislation Law bans ministries and local governments from issuing rules and policies that mitigate citizens’ rights or increase their obligations without legal basis.

The bill was submitted Sunday to the ongoing national legislative session for third reading, the first time the country’s top legislature has discussed its draft amendment in a full session. The provision in the bill is considered as the national legislature’s attempt to prevent the executive branch from churning out inappropriate rules or policies, and stresses the NPC’s leading role in legislation.

In recent years, for the sake of economic development and social management, local governments passed rules and policies that aroused concerns of abuse of power. Li Shishi, director of the Commission for Legislative Affairs of the NPC Standing Committee, previously cited local protectionism among lawmaking bodies, in addition to buck passing and power struggles.

For example, in an attempt to ease traffic jams and reduce air pollution, the Beijing municipal government banned residents from buying cars except after getting car registration licenses from a bi-monthly lottery. Private vehicles in Beijing are not allowed on the streets during specific hours one working day a week. Shenzhen in Guangdong Province introduced a similar car purchase restriction in December only 20 minutes before the rule took effect, to prevent residents from a purchasing spree that “may cause a big increase in the number of vehicles that could cause traffic jams and disorder.”

Some other cities followed suit. A number of cities also adopted stricter measures on real estate purchases, hoping to reduce speculation in the housing market.

Liang Ying, an expert with the Legislative Affairs Commission of the NPC Standing Committee, told the Xinhua News Agency that he believes the executive branch would be more cautious in issuing rules if the law is amended. “As Premier Li Keqiang said in his government work report, it goes without saying that power should be used responsibly.” “This provision will be a warning against unnecessary administrative rules,” Liang said.

Nevertheless, the bill allows local governments to issue temporary rules only in emergencies. Such temporary rules will be lifted in two years unless local legislatures pass laws to support them.