The last few weeks have probably been the most difficult ones in modern Greek history. The risk of a Grexit was particularly high while the international image of the Greek government was seriously damaged. It is now more pressing than ever to focus on the positive dimension of Greece and outline real success stories which do not always attract media attention. In that regard, the activity and work of the Stavros Niarchos Foundation are of high significance.

The Stavros Niarchos Foundation offers important, tangible solutions to the ongoing Greek crisis. It is doing so, for instance, by offering emergency grants to nonprofit organizations to cover basic needs of the population and strengthen social welfare and health. The role of the Foundation is not only relevant to the current dramatic developments but also to other systematic actions both domestically and internationally. In this context, it is worth emphasizing the way in which it forges relations between Greece and Asia.

A lot could be written on the positive dimension of Greece’s relations with Asia. This becomes even more important under special circumstances such as a humanitarian crisis. With this framework and without seeking publicity the Stavros Niarchos Foundation reacted almost immediately a few days after the devastating earthquake in Nepal. Specifically, it announced a total grant of $500,000 to Oxfam GB, and the International Federation of Red Cross, to assist international relief efforts aiming to provide critical support to the people of Nepal. As Assistant Director of Programs & Strategic Initiatives Mr. Panos Papoulias says on chinaandgreece.com, ‘This initiative of the Foundation is consistent with the philosophy and similar actions already undertaken in the past’. In 2008, for example, a critical assistance was given to China after a catastrophic earthquake hit the country. 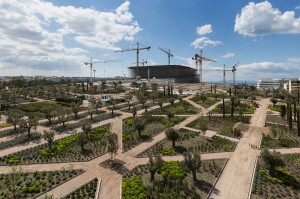 In parallel, a single glance on the website of Stavros Niarchos Foundation provides information on grants given internationally. China belongs to Asian countries which have benefited by receiving support for the organisation of cultural events and conferences. In 2008, for example, the Foundation was the Major Sponsor of the exhibition ‘The Influence of Ancient Drama in Opera and the Beijing Opera’ which took place in the Chinese capital in September 2008 in the context of the Cultural Year of Greece in China. The exhibition was highly successful. It attracted over 220.000 Chinese, Greek and international visitors in just 38 days.

Moreover, the interest of the Stavros Niarchos Foundation to actively promote Hellenic Studies abroad deserves particular attention. Following its generous donation, the Center for Hellenic Studies at Simon Fraser University in Canada was – inter alia – established. Subsequently, a unique and effective online course for the teaching of Greek language was introduced in 2003.  This e-platform gives the opportunity to many Chinese students, who are based in China, to start learning Greek. As Program Coordinator in Education Ms. Eva Polyzogopoulou explains on chinaandgreece.com, ‘The new Center has concentrated on expanding relations with Chinese academic institutions. It has also supported the development of Greek Studies in China and has facilitated exchanges of students and teachers.’

It is also important to mention that the success of the Stavros Niarchos Foundation’s donation to Simon Fraser University is confirmed by the sustainability of the Center for Hellenic Studies. Although the financial support expired in 2011, the Centre can now cover its economic needs on its own. The core of the Stavros Niarchos Foundation philosophy is that donations should go hand in hand with systematic action and long-term planning by the beneficiaries. This said, the continuous success of the Centre for Hellenic Studies at Simon Fraser University in attracting students from all over the world has facilitated the decision of the Stavros Niarchos Foundation to make a new donation. The new donation has further strengthened the Center by creating a new position of an Assistant Professor on migration studies in Greece, the Mediterranean Basin and the Middle East region.

Looking towards the future

The Foundations’ activities predate the crisis and its activities will continue after Greece leaves the crisis behind it. As an international Foundation, the Stavros Niarchos Foundation continues to receive grant requests and it is active internationally along the programmatic areas of: Arts and Culture, Education, Health and Sports and Social Welfare. All requests are carefully evaluated assuming that they fulfill all the relevant criteria.