‘Most SY.RIZ.A members want an agreement’ 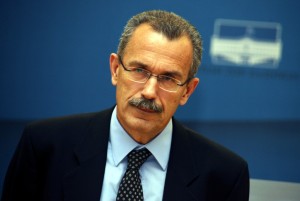 It is a pleasure to exchange views on politics with personalities such as Mr Pantelis Kapsis. One of the best Greek journalists and former Minister of State during Lucas Papademos government in 2011-2012 Mr Kapsis is looking at ongoing developments with high concern.  Taking his experience and knowledge of international politics into account, his skepticism is not an encouraging sign.

‘The Greek government is optimistic about the progress of negotiations but this optimism does not derive from the statements of its creditors’ he says on chinaandgreece.com. As he explains, this communication strategy of the Greek government might reflect either its effort to put the blame for a possible failure to foreigners or a weakness to realise the critical status of the Greek economy.

Nevertheless, the well-known journalist believes that an important part of SY.RIZ.A’s MPs would welcome an agreement with Greece’s creditors. If this happens, the Greek economy will temporarily recover following several months of uncertainty. ‘Whether such an agreement will be accepted by the parliamentary group of SY.RIZ.A and how it will be implemented are questions which can now hardly be answered’, he asserts. In this context, Mr. Kapsis does not exclude the possibility of an early election or a referendum, as the government might be in search of a new legitimacy.

As far as future privatizations are concerned and principally the one of the Piraeus Port Authority, Mr Kapsis argues that the latter might normally proceed. ‘The continuous success of the investment in the port of Piraeus from 2009 onwards is a positive indication’, he says. However, he finds it discouraging that although the Greek Asset Development Fund has initiated the procedure for the sale of a 51% stake of the Piraeus Port Authority, members of SY.RIZ.A along with trade unions attempt to block it. How can foreign investors show confidence in the country?’ Mr Kapsis rhetorically asks. He is right indeed. The Chinese government, for example, which has supported Greece during the crisis, is now suspicious and cautious monitoring inconsistency between words and deeds by Greek authorities.