Talk by George Tzogopoulos in the Embassy of China 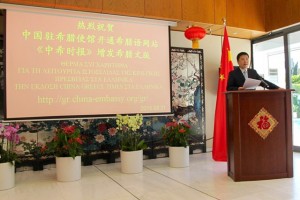 To celebrate the launch of the Greek edition of China Greece Times and of the Greek version of its official website the Embassy of China in Greece organised an event on its premises. Invited guests included Mr Koutras, spokesperson of  the Greek Ministry of Foreign Affairs, Mr Zanis, spokesperson of the Greek Ministry of Defense and Ms Lamprou, Press Counselor & Head of the Department of Digital Communication of the Secretariat. Ambassador of China in Greece Zou Xiaoli was the keynote speaker in the event. As he said, ‘It is the result of brilliant wisdom and hard work of my colleagues both of the Embassy in Athens and Ministry of Foreign Affairs in Beijing. I am very proud of them and would like to pay tribute to them. We will keep improving the website, enrich its content, and provide to our readers more fresh information on China-Greece relations and our cooperation in various areas. I also count on your valuable support and look forward to your ideas and suggestions’. 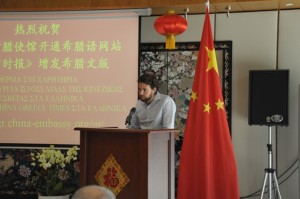 Dr George Tzogopoulos, founder of chinaandgreece.com was among the speakers during the event. In his talk he focused on role chinaandgreece.com has undertaken in the last months. As he said, the website goes beyond news coverage and analyses Sino-Greek and Sino-European relations in depth with the usage of both Western and Chinese sources. It also presents and promotes Chinese companies which invest or plan to invest in Greece and Greek companies which invest of plan to invest in China. According to Tzogopoulos, the website functions as platform for the enrichement of knowledge and the promotion of business partnerships. Additionally, he outlined the four pillars of interest for chinaandgreece.com in the near future. These are:

a) Will the volatility of the Chinese stock market turn into a crisis influencing the world financial system and Europe in the medium term?

b) Will political and economic instability in Greece deter China from making more investments?

c) Does the so-called ‘New Normal’ provide a safe basis for European investments and exports towards China?

d) Will the Asia Investment and Infrastructure Bank (AIIB) be a new tool for the financing of new works in Europe and Greece?

You can read here the report of the Embassy of China on the event.