The task of the new Greek government will be tough 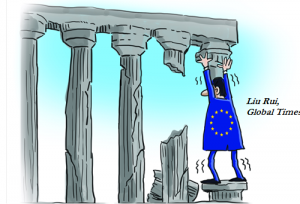 Promising young journalist Mr Costas Papachlimintzos, Managing Editor of the Greek historical daily newspaper ‘Estia’ shares his view on chinaandgreece.com regarding the political situation in Greece. According to Mr Papachlimintzos the recovery of New Democracy should be mainly attributed to the frustration of several SYRIZA and Independent Greek voters with the economic policy of their parties as well as to the change of leadership of the conservative one. He also believes that the task of the new Greek government will be particularly tough while the implementation of structural reforms will depend on the new parliamentary majority.

a) How can the recovery of New Democracy be explained?

New Democracy  might be able – on the basis of recent polls –  to slightly increase the 27.81% threshold it managed to reach in the national election of 25 January 2015. There are two main explanations of this tendency. Firstly, several SYRIZA and Independent Greeks supporters have been frustrated with the economic policy of their parties and the failure to keep their promises. And secondly, New Democracy succesfully changed its leader. Its new president  Mr Evangelos Meimarakis, who has a long partisan experience managed to achieve a satisfactory political rallying of right-wing voters who had selected other parties in the elections of 2012 and 2015. Further to this, New Democracy has employed a political communication based on consensus and this method is considered positively by Greek citizens who hope for the formation of a broader coalition after the election.

b) How can the Greek national economy develop after the election?

The Greek economy has been seriously hit by the prolonged uncertainty of the last few months and especially by the capital controls of last July. The new taxes to be imposed in October along with the previous ones will further create a climate of economic asphyxiation as far as entrepreunership is concerned. A strong government which will be able to steer the country without obstacles in the next years and carry out the necessary reforms,could create a friendly and safe atmosphere for investments and signal the beginning of Greece’s gradual return to growth. Of course, this will only happen if banks are recapitalised and capital controls are lifted.

c) Will the  new government be able to pay more attention to reforms rather than to austerity?

Austerity measures have been already decided on the grounds of the second and third bailout packages. The experience of the last five years also suggests that Greek governments find it easier to apply that kind od measures in spite of social and political reactions. Structural reforms can hardly be implemented without a straightforward timetable, systematic action and relevant expertise. A clash with trade unions and existing priviledges is also required. The new Greek government will have to reform sectors such as the economy, the education, and the public administration. A comfortable parliamentary  majority is obviously needed.