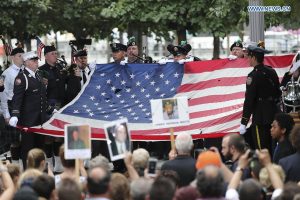 Former US Secretary of State Henry Kissinger once observed that the main difference between politicians and intellectuals is that the former need to immediately act and often have no possibility to correct their mistakes,while the latter have plenty of time to think over and restructure their ideas according to developments; equally, politicians are judged by their actions rather than their words. In the aftermath of the events of September 11, 2001, then US President George W. Bush and his administration had to make difficult decisions, which they thought could bring those responsible for the terrorist attacks to justice, eliminate the possibility of a similar disaster and make the world safer. The war against Iraq to topple Saddam Hussein in 2003 was the culmination of this preventive, unilateral strategy.

Fifteen years after 9/11, supporters of Bush’s policy believe the situation could have been even more dangerous if the pre-emptive doctrine had not been applied. They also say that the U.S. confirmed its leadership role in world affairs while never suffering a repetition of 9/11, perhaps with the exemption of the Boston Marathon explosion in April 2013.

Meanwhile, opponents of Bush’s foreign policy choices continue to argue that he is largely responsible for the ongoing chaos in the Middle East, the birth of new terrorist organizations after al Qaeda, the relative fall in American international prestige and also the dramatic increase of defense spending impacting the national budget.

What became known as 9/11 was a day shocking the world. The families of victims naturally journey back in an emotional way on each anniversary. Even ordinary citizens living outside the US feel some emotion when they look again at the videos and images of the terrorist attacks.

From a realistic perspective, Washington’s response to 9/11 was not surprising. Indeed, it was the implementation of superpower policy reflecting its hegemony. The differences between George W. Bush and his predecessors had more to do with style than substance and there was nothing revolutionary in his goals or vision. In other words, generally, there was continuity in U.S. strategy before and after the atrocities.

Lessons from the past are valuable. Thucydides’ history, which describes the war between Athens and Sparta from 431 until 404 BCE, constitutes a possible archetypical approach to power politics. It shows that states – then, city-states or “poleis” – will usually act to enhance their own power.In the Athenian justification of imperialism, and the Melian Dialogue, Thucydides articulates the Athenian belief that the international sphere is devoid of the ideas of justice and injustice. Subsequently, there is no national order in relations between states and the existing order is created and sustained by the powerful. Athens attacked the island of Melos after the island’s leaders refused to satisfy its demand to surrender because it was powerful enough to do so.

You can agree or disagree with George W. Bush’s approach to world affairs. However, disregarding idealism, this is how superpowers act and react. Fifteen years after 9/11 the main question is not whether he made the right choice or not, as it’s no use looking back. The main question is how the balance of power is being shaped in a developing multipolar era. Under the doctrine of “mutual assured destruction,” the risk of complete annihilation of both the attacker and the defender, as well as the Planet at large, requires prudent foreign policy decisions and should bring international powers together in order to secure peace and stability.

Power politics still play a major role. Nevertheless, the Thucydides’ model can hardly be again applied to the same extent as in the immediate aftermath of 9/11. Even countries with often contradictory interests such as the U.S. and the EU on the one hand and China and Russia on the other have finally more in common; some of their differences are not as important as the value of their collaboration against third actors.

The need to eliminate the Islamic State is a straightforward example. In the future, more complicated cases might arise such as bioterrorism that will require even more coordinated policies.

Fifteen years after 9/11, the globalization process and the emergence of global threats partly alters the traditional way of thinking. This time realism does not pave the way for unilateral actions but for multilateral structures.