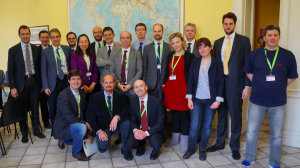 Participants of the Torino conference. George Tzogopoulos was among the speakers

As long as China is becoming an active player and investor in Europe, the interest of European businessmen, policy-makers and scholars to understand this country is gradually growing. Within this framework, a newly established group, the ‘New-Med research network’ undertook the initiative to organise a conference on ‘China in the Mediterranean’. The event took place in Turin on 17 and 18 February 2016. It was co-organised by Istituto Affari Internazionali and Torino World Affairs Institute. It was also supported by the Compagnia di San Paolo, the Italian Ministry of Foreign Affairs, The Organisation for Security and Cooperation in Europe (OSCE) and the German Marshall Fund of the United States (GMF).

The conference brought together scholars and analysts from Europe and China to discuss and explore China’s interest in the Mediterranean. Their main focus was the ‘One Belt One Road’ strategy and how this policy might impact on international relations not only in the Mediterranean basin but also in the wider region of the Middle East. Subsequently, particular emphasis was laid on China’s investments in countries such as Egypt, Greece and Italy and their implications for the future evolution of Sino-European relations. Additionally, the limits of Beijing’s non-intervention policy in the Middle East were discussed in the context of the current instability in Iraq and Syria. Also, the perspectives for China’s national economy as well as for the internationalisation of the RMB were analysed.

Being currently encountered with serious economic crises, several European countries welcome Chinese investments. In that regard, Europe finds itself in a process of developing its approach towards China which will set the basis for a win-win cooperation. The potential combination of granting Beijing a Market Status Economy (MES) with the implementation of the ‘One Belt One Road’ is, for example, is an issue of particular concern for member states such as Italy. Touching upon all these issues, the recent Torino conference can be considered a pioneering initiative to bring Europe and the Mediterranean closer to China at the business, research and policy-making level. More importantly, the ‘New-Mediterranean research network’ is determined to continue its action.