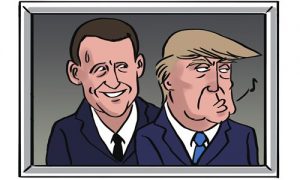 Transatlantic relations have entered a difficult period since the inauguration of Donald Trump. While during the administration of Barack Obama collaboration and mutual understanding were taken for granted on a plethora of issues of joint interest, the new US president does not significantly count on Europe. Although he has softened his rhetoric in comparison to his comments before the election of last November – principally regarding his support for NATO – the US and the EU have not yet worked out how their new symbiosis will look in the next four years.

Meetings between Trump and European leaders help both sides formulate their approaches. In that regard, the third visit of the US president to the EU deserves particular attention as he decided to go to Paris, accepting the invitation of his French counterpart Emmanuel Macron to attend the Bastille Day celebrations. The timing is symbolic. This year, American troops joined their French allies in the annual parade, to mark 100 years since the US intervened in World War I.

Until their recent meeting in Paris, Trump and Macron had met on the sidelines of other multilateral summits and events such as a NATO gathering in Brussels. One of their initial handshakes is still attracting the attention of international media. Macron treated Trump to a strong handshake in front of the cameras in May, which he then refused to release for several long moments. As he explained to French media, he wanted to show he would not make small concessions to his American counterpart.

In the French capital, the two presidents had of course much more to say than focusing on handshakes and publicly explaining them. Although their meetings started with Trump’s bizarre compliment of Macron’s wife, Brigitte, on her figure, the two leaders did later start serious discussions about Syria and terrorism. As Macron asserted during the press conference, both countries are “determined to take any necessary measures in order to root out terrorism and to eradicate it no matter where, in particular the narrative on the Internet” and also tackle cyber crime.

Also, the two presidents agreed to work together in Syria supporting a political roadmap for the post-conflict days, months and years. It is important to mention – as Macron revealed – that Paris no longer requires Assad’s departure. This constitutes a fundamental shift in French policy.  From the American side, however, the outlook for the future is obscure. Trump praised Macron in the press conference saying that “the friendship between our two nations – and [themselves] is unbreakable.” However, as it is the case with almost all of his public remarks, he was ambiguous on critical issues.

It is not clear how the US and France will cooperate on trade as Trump advocates a new type of protectionism and Macron is always talking about free trade, or more recently about fair trade, possibly as a courtesy to his American counterpart. France is enjoying a trade surplus with the US that amounted to $15.6 billion in 2016 with the total trade volume reaching approximately $78 billion.

Cooperation between the US and France on climate change also remains a mystery. Trump sent ambivalent messages about the Paris agreement when he said, “Something could happen with respect to the Paris Accord. We’ll see what happens.” With regard to NATO contributions, Trump is demanding member states spend two percent of GDP on defense. France’s current contribution is 1.8 percent. It is close to the target but still falls short of satisfying Washington’s interests.

Last but not least, it is worth-mentioning that both Trump and Macron referred to their Chinese counterpart Xi Jinping with great respect in the press conference. Trump described him as a “friend” who “loves China” and “wants to do what’s right for [it].” Macron announced that he will visit Beijing early next year, and said that he saw China as “a key partner in order to build peace all around the world” and commented positively on Xi’s multilateralism vision. When two world leaders meet to discuss other topics and simultaneously talk about the need for cooperation with China, this clearly shows the growing international role of the country.