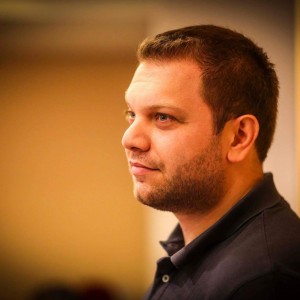 The improvement of Greece’s relations with China is an important pillar of SYRIZA’s foreign policy. In that regard, the official visit of Premier’s Alexis Tsipras to China from 2 to 6 July 2016 is of increased significance. Economist and member of the SYRIZA Central Committee , George Karatsioubanis, who is working as policy advisor in the European Parliament (EP) and also participates in the EP delegation for relations with China, was recently in Beijing to participate at the 5th China-Europe High-level Political Parties Forum. In his interview with chinaandgreece.com, he talks about this Forum as well as about future perspectives for Greece and China in view of Mr Tsipras’ official visit.

Which were the main issues discussed at the 5th High Level Forum of Political Parties?

The forging of cooperation to support economic development and the implementation of reforms by the European Union and China were the main themes of discussion during the visit of 30 political parties from 24 European countries in Beijing. The Chinese plan for an open and green economy, particularly in the context of ‘One Belt- One Road’ creates a huge potential for European and Chinese businesses. The Beijing dialogue focused on how the 13th Five Year Plan can contribute to the implementation of this strategy. Opportunities for cooperation and common challenges are of high significance for Europe and China.

How do you assess the status of Sino-Greek relations during the SYRIZA period?

Greece and China have come closer in recent years. The multidimensional foreign policy the Greek government  has  followed since January 2015, creates new perspectives for both countries. The imminent visit of Prime Minister Alexis Tsipras in China signals the importance of China for contemporary Greece. It is a new start which can lead both sides to coooperate on common future development projects in a  harmonious way. The comparative advantages of Greece in agri-food products of high quality, tourism and  culture are important fields where the Sino-Greek partnership can flourish.

How could the Greek government efficientlly contribute to the implementation of ‘One Belt, One Road’?

Greece constitutes a center of stability and peace in the wider region of South-Eastern Mediterranean and can be a hub for global commerce and a safe passage between Asia and Europe. China’s initiative to boost trade cooperation with its maritime Silk Road will strengthen transit trade, infrastructures projects and the manufacturing sector. Additionally, culture should not be ignored.  Drawing on their ancient civilisations, the two countries can mutually invest on education and sustainable development.