Tsipras new Beijing visit: Can we be optimistic? 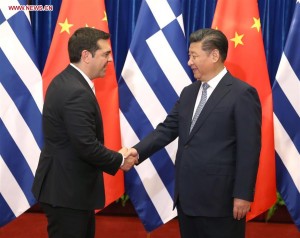 Greek Prime Minister Alexis Tsipras will pay his second official visit to China on 14 and 15 May 2017. Accepting the invitation of China’s president Xi Jinping he will attend the ‘Belt and Road’ Forum, which will be organised during these days in Beijing. The first visit of Tsipras took place in mid-July 2016, a few days after the privatisation of the Piraeus Port Authority had been approved by the Hellenic Parliament.

China is satisfied with its investments in Greece. The so-called ‘head of the dragon’, COSCO’s activities in the Piraeus port are developing fast and will expand more in the coming years in spite of  disagreements by local actors. Following the deal of the Piraeus Port Authority, China is carefully exploring how it should proceed.  The most characteristic case is the purchase of a 24 percent stake of ADMIE by China’s State Grid. Moreover, the Bank of Greece did also a sign a memorandum with China Development Bank. There are also some discussions on whether Chinese companies will invest in Greek insurance funds.

Although the Chinese strategy is straightforward and is yielding results – also benefiting the Greek economy, Greece is lacking its own one.  The Greek government is struggling to apply the bailout terms. It has not learned from its 2015 mistakes and believes that by delaying the process of either agreeing with its creditors or implementing the reforms, it contributes to common good. By contrast, it negatively influences the course of the national economy, causes uncertainty and undermines recovery. More importantly, it demonstrates that it is not interested in attracting and hosting foreign investors – and is partly doing so as part of its forced bailout obligations. Naturally, Grexit fears return. The Beijing administration is well-aware of this situation. Since the first months of 2015 the image of Greece has been negative in China. This is evident in the coverage of the Greek crisis by Chinese media.

While the Greek government is struggling to apply bailout terms and is imprisoned in a labyrinth of leftist illusions and hard realities, it misses good opportunities to put its own agenda in the Sino-Greek relationship. Several countries have specific plans when they approach China and seek joint partnerships instead of vague committents for bilateral collaboration in different sectors. Israel, a country which will never abandon its pro-US and pro-Western orientation, constitutes a very good example of how close bilateral relations with China can flourish. However, the Greek government does not pay attention to substance and find it sufficient to publicly hail the Sino-Greek partnership and future opportunities.

The privatisation of Hellinikon Airport, where FOSUN will participate in a consortium with Lamda Development, has been stuck with the responsibility of the Greek government. Chinese investors who might be interested in buying Greek properties are often discouraged by an unstable and high taxation system. Greek exports to China do not show a satisfactory increase due to Greece’s dramatic international image. Greek universities have not proceeded in agreements with Chinese institutions due to bureaucracy. Opportunities for joint research are not a priority. A remarkable example is  the recent launch of an Asian Studies Programe by the Hellenic Foundation for European and Foreign Policy (ELIAMEP) – but this comes from the private sector.

All in all, the new visit of Greek Prime Minister Alexis Tsipras in Beijing is a positive development. But as long as the Greek government is not formulating a tangible plan to move the bilateral partnership with China forward, the visit will rather be symbolic.