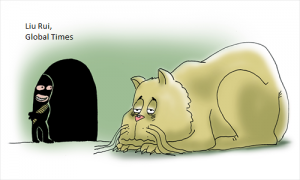 The days after the Paris terrorist attack have seen Europe on high alert. Not only Paris but other European capitals such as Brussels have taken drastic security measures to prevent a similar terror incident. Soldiers holding assault rifles, associated with war zones in the past, are now an everyday phenomenon. Border controls in the Schengen free travel area, already started during the refugee crisis, have been strengthened, putting into question one of the most important European principles: that of the free movement of people.

A parallel can be drawn between the current situation in Europe and the aftermath of the 9/11 terrorist attacks in the US. The extension of France’s state of emergency for three months along with new counterterrorism initiatives doe not substantially differ from Washington’s decision to employ new tools to intercept and obstruct terrorism leading to the voting of the “Patriot Act” on October 26, 2001.

Subsequently, Europe is encountering the debate that flourished in the US 14 years ago around the impact of new security policies on civil liberties and their repercussions on society and politics. Several scholars and intellectuals often criticize new government actions for three main reasons. First, they emphasize the need of ordinary citizens to preserve their right of privacy and freedom of movement. Second, they consider the strengthening of security forces as an indirect endorsement of the agenda of right-wing parties that have been vocal on the matter for years. And third, they warn on the establishment of an anti-Islamic protection umbrella. The measures claim not to target Muslims, but Islamophobia is often prevalent nonetheless.

The arguments of scholars and intellectuals outlining these risks might be well-grounded but cannot escape from the trap of theoretical thinking. The urgency of a response does not allow much time for fruitful discussions and a time-consuming exchange of views. Additionally, this argument fails to acknowledge that citizens, who are either affected personally by terror attacks or live near places where threat is considered high, are primarily interested in the supposed risk to their own safety.

A balance between counterterrorism and other important issues such as civil liberties should be the utmost goal of every government in Europe. However, it is highly difficult for this balance to be kept in times of crisis. It could be deemed cynical but what matters more now is the preservation of every single human life than the violation of privacy or an expanded set of precautionary arrests and interrogations. The anti-terror effort might also include the hiring or training of IT experts.

In the long run, the future of Europe cannot be associated with military scenes and contradictory policies that do not match its principles and values. This is necessary in the short and medium term though. Europe, especially the French government, failed to act preventively for so many months after the Charlie Hebdo attack, so they have now no other choice but to follow the American paradigm after 9/11.

The ongoing alert can give time to the governments, intelligence services and the police among different countries to better cooperate, improve mistakes of the past and locate terrorists. What is highly important is that this mission will be of a temporary nature aiming at transforming the current insecurity into safety in a new society that will be more mature to incorporate people from different religions and civilizations.

If normal citizens are not mobilized, security measures alone will be inadequate.