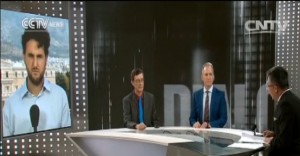 Participating on CCTV Special News Programme on 14 July 2015 George Tzogopoulos expressed his hope for the formation of a unity government in Greece.  As he said, the new bailout will be tough for Greece but its success will depend on whether Mr Tsipras will pay more attention to the implementation of structural reforms rather than to austerity measures. In tha regard, he attempted to provide an explanation for the current deadlock in Greece arguing that Tsipras’ predecessors had not been keen on changing Greece from within and preferred raising taxes and cutting salaries. Additionally, Tzogopoulos emphasised the need on privatizations and referred to the example of COSCO in the port of Piraeus.

You can watch the video here.