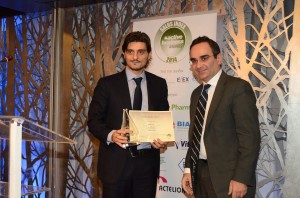 Almost in parallel with the delivery of the first batch of vancomycin antibiotics to China, largest Greek pharmaceutical company VIANEX SA received an award in ‘Salus Index 2014’. The award was received by the Vice President and Deputy CEO of VIANEX Mr Dimitris Giannakopoulos. In his speech Mr Giannakopoulos argued:

‘I would like to thank you for this award; it is a great honor for VIANEX, which remains faithful to its ideals in its 90-year course. We say ‘no’ to layoffs and salary reductions, we continue to offer high quality Greek medicines, with new investments, new product design and increase of extroversion.
This distinction comes in a pleasant moment for us, since just yesterday we announced the arrival of the first batch of vancomycin in China, as part of our partnership with ELI-LILLY.

Unfortunately, we do not hear often, good news for Greek medicines and health, since instead of “ally” … we are faced with a government that is essentially absent from the major problems faced by patients. The hospitals have dramatic shortages in medicines and medical supplies, pharmacists are anxious about the future of the Greek pharmacy and not only that…

This is the state in which the government of Samaras condemned the Greek society, by continuing with the same toughness and loyalty to the requirements of lenders, the work of memorandum governments that have preceded. With absurd measures, which make sense only if viewed in the light of serving of specific interests, public health is deteriorating daily, turning us back in previous decades. The Greek pharmaceutical industry struggles to stand upright, in a hostile environment, which was “built” in recent years systematically, by people who did everything to destroy it. I speak for Mr. Andreas Loverdos and Mr. Adonis Georgiadis.

We are faced with successive reductions in drug prices to levels that tend not to meet the cost of production, at least in Greece, as the government seems that calculates the prices based on the prices in India or Pakistan. It is certain that soon, as the pharmaceutical expenditure is “stuck” at 2 billion Euros, we will be faced with the unpleasant situations: a glaring health crisis for patients and “padlocks” in the Greek pharmaceutical industry, if we consider the continuous reductions of the prices and the rebate and the clawback’.