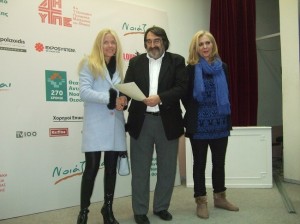 VIANEX S.A. has received an award as a recognition of its crucial support for ‘NOIAZOMAI’ (I CARE) social solidarity network. This network was established and operates under the auspices of the Cancer Hospital ‘THEAGENEIO’ in Thessaloniki. A special event was organised in the auditorium of the Hospital on 12 January 2015 during which leading Greek pharmaceutical company was endorsed for significantlty supporting the network. In particular, VIANEX S.A. contributed to the purchase of a large number of invitations collecting the amount of € 5.000 .  The award was received by Head of the company’s commercial department in Northern Greece Ms Myrto Nikolaou.VIANEX S.A. was the first company to receive it following individual donor businessman Paraskevas Baklatzides.

On the occasion of the event, Director of ‘THEAGENEIO’ Hospital Dr Evangelia Kourteli-Ksouri,  referred to the purpose of ‘NOIAZOMAI’ which is to provide medical assistance (hospitalisation, surgeries, etc.) and offer relief to cancer patients without insurance. ‘The stage which cancer patients pass through is not a simple flu but simultaneously life and death’ she says. In her view, ‘what we have to do is to help patients having access to a free healthcare system’.

From February 2014, when the network was launched, to the present date, 121 patients have applied and received medical care under the NOIAZOMAI network initiative. Of these, 93 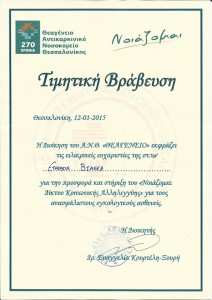