VIANEX supports ‘Elpida’ Association of Friends of Children with Cancer 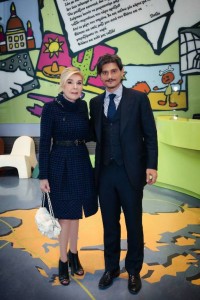 VIANEX pays particular attention to social responsibility programmes aiming at supporting various organisations and associations as well as at boosting welware initiatives. In this context, it supports the ‘Elpida’ Association of Friends of Children with Cancer. The excellent co-operation between the two sides was confirmed during an event which was  held on Wednesday 20 January 2016 at the Marianna V. Vardinoyannis – ELPIDA Children’s Oncology Unit at the Agia Sofia Children’s Hospital. The event was attended by President of the Elpida Association and UNESCO Goodwill Ambassador, Ms Marianna Vardinoyannis, and Vice President and Deputy CEO of VIANEX, Mr Dimitris Giannakopoulos.

At the event, Ms Vardinoyannis presented ELPIDA’s honorary plaque to Mr Dimitris Giannakopoulos in acknowledgement of his contribution to the work of the association. Ms Vardinoyannis announced that the next objective of the association was to establish the first paediatric transplant centre in Greece specialising in liver, lung, and kidney transplants, while the Director of the Agia Sofia Children’s Hospital, Manolis Papasavvas, explained that the only children’s nuclear medicine department in Greece would shortly be in operation at the hospital. 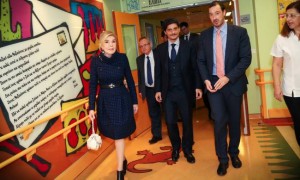 Acting on the initiative of his father – President of VIANEX, Mr Paul Giannakopoulos- Mr Dimitris Giannakopoulos was able to surprise the ELPIDA Association with a donation of medicines worth EUR 100,000. Among other things, Mr Giannakopoulos had the following to say as he received the award: “The greatest honour for me personally, and for my family too, is the opportunity that you give us to make even the smallest of contributions to the enormous social project you have tirelessly carried to fruition over more than two decades. We are committed to standing side by side with you in the battle against childhood cancer. To contribute to the practical support of young patients and their families that you provide through the Bone Marrow Transplant Unit, the Children’s Oncology Unit, the Elpida family guest house and all your other initiatives. To the way out offered by Elpida, when all other paths to life seem to be closed”.