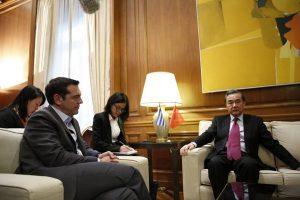 Other participants included Bolivia, Egypt, India, Iran, Iraq, Italy, Mexico and Peru. The Athens Declaration outlines the will of delegations headed by foreign ministers to put emphasis on the omnipresence of their ancient civilizations and the need to protect cultural heritage. It also reflects the urgency for joint action in the fight against illicit trafficking and better coordination with international bodies such as UNESCO.

Foreign ministers acknowledged in Athens that cultural diplomacy is a soft and smart power and a major component of international relations. Here, the role of China is critical as long as it is being involved in new economic and investment activities all over the world in its attempt to revitalize the ancient Silk Road. So, in their Athens Declaration foreign ministers referred to how the Belt and Road policy can promote relevant dialogues and increase people-to-people bonds.

The current juncture is not particularly encouraging for world civilization. The Islamic State has shown an unprecedented appetite in destroying the treasures of the ancient world in the Middle East with its boastful videos shocking viewers. Iraqi Foreign Minister Ibrahim al-Jaafari, for instance, condemned in Athens the terrorist organization for devastating the cultural heritage of his country. It is certainly a failure of the international community not only that it did not prevent the destruction of antiquities but also that it allowed the emergence of the Islamic State which still remains active.

Peace is therefore a prerequisite for civilization to be preserved. And it is perhaps the most important challenge for China to safeguard peace in regions where the Belt and Road initiative is realized and beyond. This goes hand in hand with the concept of its “peaceful development” and can bring the country even closer to Greece. Greece – in spite of its existing economic difficulties – has been remarkably stable in a turbulent neighborhood, where wars, terrorist actions, high tensions and internal cleavages are not a rare phenomenon.

The Athens Declaration reminded us of the significance of the Olympic Ideal and the idea of Olympic Truce. Taking into account that three consecutive Olympiads will take place in Asia – the 2018 Winter Olympics in Pyeongchang, South Korea, the 2020 Summer Olympics in Tokyo, Japan and the 2022 Winter Olympics in Beijing, China – this message has a powerful resonance. While the U.S. is abandoning its “strategic patience” dogma vis-à-vis North Korea, all scenarios seem to be on the table, even that of pre-emptive action against Pyongyang. The bombardment of Syria and Afghanistan could be a model according to some observers.

However, as President Xi Jinping told his American counterpart Donald Trump during their telephone conversation, it is wise for all sides to keep calm. During his press conference in Athens, Foreign Minister Wang also commented on China’s position on the North Korean issue. He urged for peace, stability and reason without ignoring his country’s major responsibility. It is indicative of China’s new international role that Wang was asked by the media on North Korea during a European visit with another purpose. In the U.S. and recently in Europe more and more journalists understand the changing dynamics of world politics.

Going back to culture, it is positive when political elites pave the way for more cooperation in this field. However, the main challenge is not only to remember the past but explore how it could be the beacon for the present and the future. The younger generation – often suffering by unemployment and job insecurity – is interested in combining culture with day-to-day activities. The foreign ministers agreed in Athens that culture “can and must be further deployed as an agent of economic growth.” This observation needs to be specified in order for policy recommendations to be made.

At the first stage, the idea could be the steady public support for cultural and creative industries in participant countries and the giving of incentives for the creation of relevant consortia. Subsequently, the mobilization of the society will be beneficial. Perhaps the best way to approach another culture is via tourism. Tourism has to be combined with modern technologies in order to facilitate exchanges, offer convenient choices to visitors and overcome language barriers. China’s technological innovation could be a model to be used by young entrepreneurs investing in new online methods.

The next Ministerial Meeting of the Ancient Civilizations Forum will be held next year in Bolivia. Until then, high level representations will deal with important political and economic themes. Working groups should be established in participant countries to catch the good momentum, locate interested participants, help communication, monitor common actions and measure results.

All in all, the Athens event was a good beginning. But it needs continuity for it to be established as a successful institutional network.