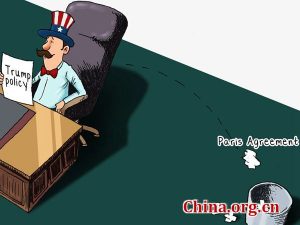 The 19th China-EU Summit took place at a critical moment for world affairs. The decision of U.S. President Donald Trump to withdraw from the Paris climate agreement leaves many questions unanswered on how international cooperation will proceed under his presidency. While his decision has been negatively framed across the world, other powers need to share the responsibility to lead the initiative and tackle global warming.

Some Western media have diagnosed an opportunity for China. In a remarkable example, The New York Times writes that “Trump hands the Chinese a gift,” explaining that the U.S. president “has created a power vacuum of global leadership that presents ripe opportunities to allies and adversaries alike to reorder the world power structure.”

On the same wavelength, vox.com asserts that “Trump pulling out of the Paris climate agreement is great news … for China.” However, this is not the right time to anticipate if Beijing will benefit. The priority is to push forward with the Paris accord even without the U.S.

Subsequently, Chinese and EU leaders have banded together to accelerate the global transition to clean energy. This is certainly an unusual alliance that emphasizes the absence of the U.S. Chinese Premier Li Keqiang confirmed that China will stand by its responsibilities on climate change while EU Commissioner on Climate Action and Energy Miguel Arias Cañete praised Sino-European collaboration on issues like emissions trading and clean technologies.

Discussions on climate change had naturally the lion’s share during the 19th China-EU Summit as it coincided with Trump’s pull-out decision. Of course, the Sino-European partnership goes beyond the Paris agreement in spite of its critical significance. The China-EU 2020 Strategic Agenda for Cooperation constitutes the basis.

The two sides are systematically making steps to find common ground on four different aspects: peace and security, prosperity, sustainable development and people-to-people exchanges. The progress made was outlined during the Summit. The official full list of outcomes presents thirty specific achievements. Opportunities are apparent.

The Belt and Road Initiative that promotes infrastructure works can match with the Investment Plan proposed by the European Commission. That is because the latter functions as a leverage to attract foreign capital which can be easily provided by Chinese public and private enterprises. Banks from the two sides have also started to find cooperation platforms. This is the case with the Asian Infrastructure Investment Bank and the European Bank of Reconstruction and Development.

Moreover, strategic planning brings China and the EU closer. They certainly agree to cooperate against terrorism, illegal migration, cybercrime and transnational crime but now they are making specific decisions. China and Europol agreed in April to strengthen law-enforcement cooperation to boost security. At that time, visiting State Councilor and China’s Minister of Public Security Guo Shengkun had said that the two sides should further improve the communication mechanism and give prominence to the key points. The shared commitment was reiterated in Brussels a few days ago.

All this does not mean that China and the EU do not have differences. Last year, the EU was very skeptical in granting China Market Economy Status and this skepticism caused frustration to Beijing. The Chinese administration is also concerned about the continuation of the arms embargo while it strongly disagrees with some communiques of international bodies where European countries participate – such as the G7 – which refer to the situation in the South China Sea and East China Sea in an unfair way.

From its part, the routinized term used by EU policymakers in their approach vis-à-vis Beijing is “reciprocity.” Practically, they ask for more opportunities for European companies in order to do business in China. They also share the anxiety of some European industries which cannot easily compete with cheap Chinese products exported to Europe and regularly complain to Chinese authorities about this. Within this context, some European countries refrained from endorsing China’s trade priorities during the recent international forum on the Belt and Road Initiative.

Differences always exist between partners. In spite of disagreements, the glass can be seen as half-full. The EU was China’s supporter in the inclusion of the Renminbi in the Special Drawing Rights of the International Monetary Fund. Further to this, most European countries entered the Asia Infrastructure Investment Bank from the very first beginning despite the U.S. objection.

Moreover, China is committed to supporting openness according to recent pledges made by President Xi Jinping and Premier Li Keqiang. From another perspective, the term “reciprocity” should not exclusively be used by the EU. China, for instance, is equally right in complaining that the number of Chinese students studying in European universities is much higher than the number of European students studying in Chinese institutions.

All in all, China and the EU will look towards the future with optimism, seeking to co-operate where they can and possibly freeze a few sensitive or delicate issues. As far as China’s interest is concerned, this model is sustainable. It manages to reinforce ties with one of its most significant partners – the EU – while the U.S. has lost its international momentum.

It also has the opportunity and privilege to approach member-states independently and sign important bilateral economic deals. It is not a coincidence that before reaching Brussels, Li made a stop in Berlin. This is how diplomatic success can be built.