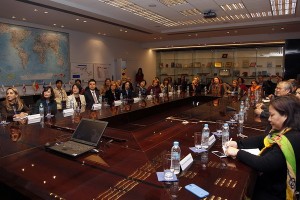 In order to celebrate the ‘International Women’s Day’ and increase the understanding of the Greek society about the COSCO Piraeus project, Counselor Ni Ying, wife of Chinese Ambassador Zou Xiaoli, organised representatives of women in Athens to visit Piraeus Container Terminal S. A. (PCT). Over 60 people attended the event including the wife and daughter-in-law of Minister of State Flambouraris, the wife and daughter of the mayor of Aspropyrgos, wife of the mayor of Megara, Vietnamese Ambassador to Greece, Chile Ambassador to Greece, wife of Ambassador of Mexico to Greece, vice-president of WIC, representatives of overseas women in Greece, women journalists and the women’s group of the Chinese Embassy.Women representatives visited Pier 2 and 3 of PCT and listened to introduction about the company’s past achievements and future plans with great interest.

On this occasion, Ambassador Zou Xiaoli sent festival greetings and gave a speech on Sino-Greek relations. He said that after COSCO  was declared by the Greek Privatisation Fund the preferred investor to buy a 67 percent stake of Piraeus Port Authority (PPA), several people habe shown strong interest in the project. He quoted the old Chinese saying, ‘it is better to see once than to hear a hundred times’, which means, ‘seeing is believing’.

Ambassador Zou pointed out at the end of his speech that confidence, trust and cooperation are the foundation for overcoming difficulties and realising common development and prosperity.

Counselor Ni Ying thanked women representatives for actively participating in the event. She said that the Chinese Embassy in Greece was ready to enhance ties with women from all walks of life so as to increase mutual understanding and friendship.

Source: Embassy of China in Greece