How will Barack Obama be remembered? 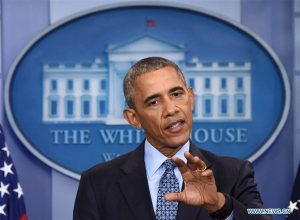 Eight years ago, Barack Obama entered the White House, inheriting both an advantage and a disadvantage from his predecessor and the circumstances. In particular, the chaos in the Middle East – namely in Afghanistan and Iraq due to George W. Bush’s wars – and the then uncontrollable financial crisis threatening world stability gave Obama a long grace period but also increased pressure for a fundamental change and an efficient response. On the whole, although his administration could easily find good excuses, it did not always meet the high expectations.

To start with domestic politics, the 44th U.S. president endeavored to overcome the financial crisis by increasing government spending in order to boost growth and accelerate recovery. His policy was only partly successful. On the one hand, unemployment was reduced – for example it fell below 8 percent one month before the presidential election of November 2012 as business companies managed to create new job positions. On the other, however, living standards for the middle class deteriorated. Many people, for instance, could only find part-time employment. In that regard, a study by the American Enterprise Institute cynically explains that the American middle class has been left a “day late and a dollar short.”

From another perspective, Obama deserves credit for his health care reform. Data from the U.S. Centers for Disease Control reveal that the number of uninsured persons declined by 21.3 million in comparison to 2010. More importantly, it is the weakest part of the population that has principally benefited by the so-called Obamacare. With reference to immigration, however, Obama did not quickly proceed towards the legalization of the status of people living under the threat of deportation. He pushed for relevant reform only in his second term, when the Congress was controlled by the Republicans. The result of delay was that only a temporary protected status was granted.

Concentrating on foreign policy, the overall performance of the 44th U.S. president was rather problematic. Certainly, there are three main issues where he scored important points. The first is the killing of Osama Bin Laden in 2011. The second is the signing of the international deal on Iran’s nuclear program in 2015, in which, though he was not of course the only player, he certainly contributed significantly. And the third is the reconciliation between his country and Cuba which started in 2015 and yielded some initial results in 2016.

Apart from these three issues, the U.S. lost part of its past international prestige during the Obama years. His preoccupation against the usage of military power – mainly ground forces – improved the image of America in the world and led to a reduction of anti-Americanism but deprived him of the use of a significant diplomatic tool when negotiating with foreign leaders or discussing thorny themes. Subsequently, it is fair for Obama and his foreign policy team to be criticized for the ongoing instability in Libya and Syria as well as for the weakness in anticipating the rise of the Islamic State and the failure in eliminating it after its emergence.

Furthermore, Obama lost momentum in approaching the Muslim world and possibly contributing to a resolution of the Arab-Israeli conflict. Although he began his first term in 2009 with a speech in Cairo, he was later caught by surprise with the Arab Spring. The situation in the Middle East did not improve and new war fronts broke out around cities such as Mosul and Raqqa. And Obama not only failed to broker a deal between the Israelis and the Palestinians but partly damaged the traditionally excellent relationship between his country and Israel. The recent UNSC Resolution 2334 against Israeli settlements – which for the first time the U.S. decided not to veto – is a remarkable example.

With reference to China and Russia, the approach of Obama led to an increase of tensions. The U.S. pivot to Asia, his emphasis on the encirclement of China and his proposal for the establishment of the TPP without the participation of the latter caused a reaction by the Beijing administration that clearly demonstrated its willingness to protect its national interests and expand international ties via B&R and other schemes such as AIIB. If Sino-American relations remained relatively stable and calm under Obama, this was not the case with Russian-American relationships, which experienced their worst moments after the end of the Cold War in the context of the Ukraine crisis. The 44th U.S. president endorsed the idea of containment of Moscow and sought to avoid its international isolation. Despite some initial success, his counterpart Vladimir Putin changed the game in the medium-term. Nonetheless, a rivalry marked their personal relationship and tarnished international affairs in recent years.

To sum up, Barack Obama will be generally remembered as a president who missed an opportunity to correct the flaws of the George W. Bush period, empower his country domestically and achieve more internationally. His communication skills and often conciliatory and gentle tone did not necessary match his policies, which are measured by specific results and assessed by ordinary citizens. In the final account, the failures and inadequacies of his presidency – such as the ones described above – are related to the reasons that led American citizens to expressing their frustration against mainstream politicians and electing Donald Trump last November.