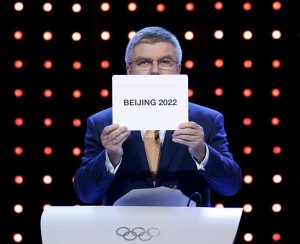 Beijing has won the bid to host 2022 Winter Olympic Games. The International Olympic Committee has made the announcement in Kuala Lumpur, Malaysia.This means Beijing will be the first city to host both the Summer and Winter Games.In a recorded video presented to the IOC before the vote, Chinese president Xi Jiping says letting Beijing host the Winter Olympics will put a new emphasis on Winter sports in China.Beijing successfully hosted the Summer Olympics in 2008. Many of the venues used in that event will also be used in 2022.