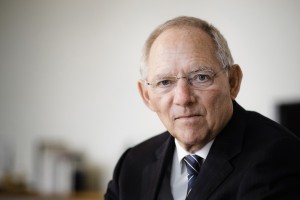 Speaking in front of an audience of pupils and students in Berlin on Wednesday 6 May 2015, German Finance Minister Wolfgang Schäuble asserted that only Greece alone can solve its own problems. In so saying, he argued that it would be better for Greece not to think about having China or Russia as creditors. ‘The Chinese side donates no money’, Schäuble clarified and explained that there is only interest from Chinese investors in the process of privatizations but this is not much.