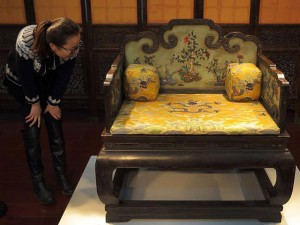 A throne belonging to Emperor Qianlong during the Qing Dynasty in the 1700’s has sold for 5.15 million US dollars at auction.The sale took place in Nanjing, East China’s Jiangsu Province. The throne, made of rosewood and inlaid with gold and a floral pattern, was owned by philanthropist Li Chunping.It took him three years to buy the throne from a descendant of a royal highness of the Qing Dynasty in Tianjin.Li said the final price was lower than he expected and that the throne will have a higher value after two or three years. A buyer from Beijing bought the throne after three rounds of bidding.