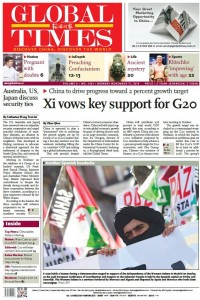 In its cover-page of 17 November 2014, Global Times  places emphasis on the role China will play for the implementation of the G20 objectives in coming years. As the newspaper asserts this role will be ‘prominent’ in achieving growth targets and setting up a global infrastructure hub. The cover-page of Global Times also  presents ther picture of a man holding a banner and demonstrating in favor of the independence of Western Sahara in Madrid and refers to the discussion between the US, Australia and Japan on security.