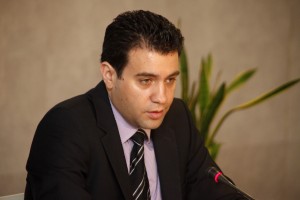 Attempting to contribute to a better understanding of political and economic developments in Greece and of the day to come after the snap election of 20 September 2015, chinaandgreece.com has conducted an interview with Greek journalist Andreas Papadopoulos who also has a significant, tangible experience from Greek politics. According to Mr Papadopoulos the result of the election cannot be safely anticipated. But apart from the party to win this election, what is critically important for the new government is to appoint new members who will be able to implement the necessary structural reforms. This is how Greece might attract foreign investments and bury Grexit scenarios.

What will be the defining feature to determine the election result?

The snap election of 20 September 2015 might be similar to the national one of April 2000 when PASOK managed to secure its win quite late in the night while New Democracy supporters had already started earlier to celebrate . In other words, no one is now able to predict the result. In my view the final decision of undecided voters will be critical. Their large majority had voted for SYRIZA in the previous snap election of January 2015. Further to this, many of them favor Greece’s return to the drachma and even an exit from the EU. On these grounds, undecided voters will hardly join New Democracy. The main question is whether they will vote SYRIZA again or they will abstain. Additionally, the TV debate between leader of SYRIZA Alexis Tsipras and the one of New Democracy Evangelos Meimarakis could also play a role for the first time in Greek politics.

What are the scenarios for the day after?

A coalition government should be definitely formed. This can either happen with a co-operation between New Democracy, PASOK and Potami or with a co-operation between SYRIZA, PASOK and Potami. I do not expect the winner to collect more than 130 seats in the Greek Parliament and therefore three parties will be required to join any coalition government.

Will it be possible for the next government to apply bailout terms and overcome political and social obstacles?

Taking into account that even SYRIZA is now a pro-bailout party, a sentiment of calmness prevails in the society. Many Greek citizens now know there is no other alternative. But as far as political developments are concerned, the composition of the new government will be of high significance. SYRIZA, for instance, lacks the appropriate personnel which will be able to assume ownership and implement structural reforms. There are politicians though who are able to do so. Examples include Anna Diamantopoulou, Ioannis Ragkoussis, Alekos Papadopoulos, Marietta Giannakou, Nikos Christodoulakis, Manos Matsagkanis, Nikos Alivizatos, Antonis Manitakis and Elias Mossialos. These politicians are not candidates for the election of 20 September and therefore they will not be elected as MPs. But they can participate in any new coalition government provided this government will attempt to make steps forwards. Last but not least, the new government could also benefit more by current Governor of the Bank of Greece Ioannis Stournaras, His role has been certainly catalytic in the previous years.

Will the new Greek government be able to attract foreign investments?

The new Greek government will be able to attract foreign investments only if it enjoys some of the afore-mentioned gifts. Without a stable taxation system, simple business procedures, a friendly environment for foreign investors and an end of Grexit scenarios, we cannot be particularly optimistic.  Political uncertainty deters foreign investors. Is it possible for foreign investors to start a business operation in Greece when they are not sure about the amount of taxes they need to pay and when they doubt Greece’s stay in the eurozone? The case of Skouries in the Greek region of Halkidiki is an indicative example of how Greece’s public image can seriously be damaged.

*Mr Andreas Papadopoulos was born  in Athens in 1977. He studied political science in London and communication studies at the ‘Journalism Workshop’ in Athens. From 2010 until 2013 he was spokesman of the Democratic Left party. He worked in Avgi newspaper from 2004 until 2010 and in To Kokkino radio station from 2007 until 2010. Currently he is the political editor of Ependisi newspaper, a radio producer in Parapolitika radio and a columnist in Athens Voice.