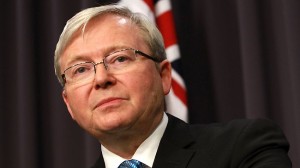 Kevin Rudd, former Australian prime minister and senior fellow at the Harvard Kennedy School, said that the difficult problems for the China-US relationship can be managed and his proposal is a narrative of constructive realism on the common purpose in an interview with Global Times in Beijing ahead of Chinese President Xi Jinxing’s state visit to the United States.

Rudd pointed out that there are many obstacles for the Sino-US relationship right now, a fundamental obstacle is that both countries need to decide what they want from their own future relationship and they have to summarize that in just two or three sentences.

“Because you need to explain to the people of each country: What do you want from the future Sino-US relationship?” Rudd explained. Rudd noted that at present, there are so many different schools of thought about what that might be. “In the past, I have described this as an absence of a common strategic narrative. That’s really important because it’s not just the leadership, the government, but also the people who need to know where these two great countries want to go with each other for the future. ”

The strategic narrative should embrace the things that are positive and also recognize the things that are difficult, so that these things could be handled together and at the same time, said Rudd. “That’s one of the reasons why my own proposal is a narrative of constructive realism on the common purpose. It’s very useful to explain to people that we’ve been realistic about where we disagree, and we’ve been constructive about all the areas where we do agree and can work together. We share a common wish, which is how we strengthen them and reform the rule-based order for everybody for the future. That’s what I mean by strategic narrative,” said Rudd.

Rudd noted that the Sino-US relationship goes through ups and downs in terms of the issues of the day. The general trend however is pretty positive. “For present, Sino-US relations is positive, challenged, and it’s a relationship that is only limited by imagination. Then for the future, it could be described as creative, cooperative and constructive, that is building things together,” Rudd stressed, “Anyone out there who is saying there is a crisis in Sino-US relations is talking nonsense.”

“Mr. Xi’s speech at the Central Conference on Work Relating to Foreign Affairs in November 2014 offers a large basis of cooperation between the US and China on the global order questions, ” Rudd said. “On the regional security questions, despite the disagreements over the South China Sea, East China Sea and Taiwan, there are many areas of regional strategic and security cooperation in Asia.”

He said, in the process of transition between the old and new economic models, China has run into some strong headwinds or difficulties. China is still contributing to global growth while many economies in the world are not. And China’s economic fundamentals are strong. “China’s special role on the environment and on the economy is to achieve long-term sustainable economic development to create jobs for the world, but also to have a sustainable natural environment for the next generation, ” Rudd said.

He pointed out that in the Asia-Pacific, both the US and China have a unique opportunity to get together with other regional countries to begin talking about the details of what President Xi has described as the “Asia-Pacific dream.” The question is how to put flesh on the bones of this dream and how to color the picture. I think with a creative dialogue, we can do that.

Rudd said he believes that the US will succeed in concluding the Trans-Pacific Partnership (TPP) and it’s very important for the US to integrate the TPP with the rest of the region.“Historically trade policy has brought our region together. The worst thing we want is for TPP to begin to divide our region into two: the TPP group and the non-TPP group. So my concern is a possible division over trade, ” Rudd said.

“The challenge for the US and China is to bring these concepts together, once TPP is concluded. And I’ve always urged the American friends to keep the door wide open to China,” Rudd stressed.