Panathinaikos BC to play on Euroleague Basketball Asia Tour 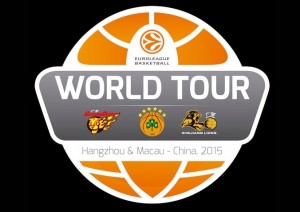 The most successful Turkish Airlines Euroleague club this century, Panathinaikos Athens, will return to China for two exciting games this fall as part of the 2015 Euroleague Basketball World Tour. Panathinaikos will face the Zhejiang Lions on September 28 in Hangzhou, China, and two days later will go against the Guangdong Tigers in Macau, China.

The games on the Asia leg of the world tour continue a growing tradition of Euroleague Basketball teams playing exhibitions on the continent. Since 2007, CSKA Moscow, Real Madrid, FC Barcelona, Alba Berlin and Benetton Treviso have also played there. This will be the second appearance by Panathinaikos in China after it debuted there in 2013 playing the Foshan Long Lions.

The visit by Panathinaikos comes as Euroleague Basketball has enhanced its presence in Asia through agreements with Oceans Marketing, which owns exclusive rights to manage the Euroleague Basketball Asia Tour, and with media giant HBN (Beijing Hualu Baina Film & TV Inc.), which recently joined on a 15-year, over €30-million agreement to promote Europe’s top competition among the countless basketball fans in China and beyond.

“We are thrilled to have Panathinaikos Athens engage with Asian fans on and off the court as we embark on a long-term relationship to share European basketball values there,” Jordi Bertomeu, Euroleague Basketball’s President and CEO, said. “The Euroleague Basketball World Tour is all about not only showing off our stars and our unique basketball style, but building bridges between cultures, too, and it will be exciting to see that again in Hangzhou and for the first time in Macau.”

“This is going to be our second trip to China and it is a great feeling. We found very interesting people in our first trip there, with a lot of productive ideas about basketball,” Manos Papadopoulos, Panathinaikos Athens President, said. “Of course, it is a great honor to represent Euroleague, a top-class organization, in a big market and to have the opportunity to promote European basketball in China. For sure, all Panathinaikos members will do our best in order to have a very productive experience. We never forget that we are one of the most successful clubs in European basketball history. We must be pioneers and also cooperative in such great efforts that bring all people who love basketball closer.”

“I am very happy for the fact that we, Panathinaikos, one of the most successful clubs in Europe, will represent Euroleague Basketball in China. This is an excellent cooperation and our goal is to promote the top European organization in a country with billions of people who have proved that they love basketball,” Miroslav Raduljica, Panathinaikos Athens player, said. “I know that well because I have played in China. I believe that all people – athletes, coaches, officials – who participate in the Euroleague should be always ready to respond in such exceptional actions with the goal to promote European basketball.”

“For the third year, Euroleague Basketball Asia Tour will bring excitement to devoted basketball fans. Due to our experience, OCEANS will deliver a spectacular and unforgettable experience to spectators and athletes,” Shoto Zhu, OCEANS Sports & Entertainment Inc. President, said. “I wish Panathinaikos Athens a superb tour and hope they will keep fantastic memories of China once they return home. We look forward to seeing you on the court!”

In addition to the exhibition games, Panathinaikos will partake in activities to benefit the local communities that the team will visit, among them a session of One Team, the corporate social responsibility program of Euroleague Basketball, which has already enjoyed success in China thanks to the participation of FC Barcelona last season and Real Madrid the one before.

Panathinaikos is a six-time Euroleague champion – tied for second-most all-time – and won five of its titles since 2000, more than any other team. Likewise, no European team has more titles than Panathinaikos since the Final Four era began in 1988. The Greens will be lead into action by their new head coach, Aleksandar Djordjevic, as well as the legendary Dimitris Diamantidis – the Euroleague’s all-time leader in assists, steals and performance index rating points – as well as the high-flying James Gist and up-and-coming young stars Nikos Pappas and Vladimir Jankovic.

Zhejiang Guangsha Lions, one of the most powerful teams in the Chinese Basketball Association, finished seventh in the 2014-15 regular season with a 27-11 record. The arrival of former Euroleague star Jeremy Pargo, last with Maccabi Tel Aviv, will only make Zhejiang stronger in the upcoming season. Zheng Wang and Zhijie Ling are its best local players. Zhejiang has experience playing Euroleague teams, having been the first opponent for FC Barcelona on last season’s tour. Barcelona won their game 83-94 in Hangzhou, where fans will be waiting again to see another of the Euroleague’s iconic clubs in September.

Guangdong Southern Tigers won the 2014-15 CBA regular season with a 34-4 record before falling in the semifinals to the Beijing Ducks. Guangdong has its own local superstar in Yi Jianlian, who averaged 27.6 points and 10.8 rebounds in 46 games last season. Founded in 1993, Guandong was the first non-government owned professional basketball club in China. With Jianlian as its superstar, Guangdong won three consecutive Chinese League titles from 2004 to 2006, and did even better with four in a row between 2008 to 2011. Guangdong added its last CBA title in 2013.