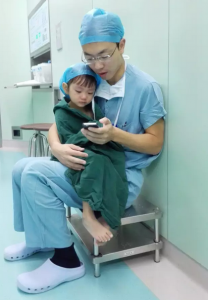 Recently, a set of heart-warming photos of a doctor soothing a two-year-old outside a operating room have gone viral on China’s social media.
The photos, taken in a hospital in Hangzhou, in east China’s Zhejiang Province, show a doctor trying to calm down an adorable little girl with a cartoon app on his cellphone ahead of her heart surgery.The doctor captured in the photo, named Shi Zhuo, is a father of a 6-year-old girl.

The doctor said the toddler, named Xiner, kept crying after entering the surgery room. In order to calm down the little girl, he held her and showed her a cartoon app on his cell phone to comfort her. The 2-year-old was smoothed by the app, allowing the surgery to procceed. The doctor’s move touched many Chinese netizens and won their praises.