Works for the expansion of Pier III in Piraeus to begin

Prime Minister of Greece Antonis Samaras inaugurated on 22 January 2015 the beginning of works for the expansion of Pier III in the port of Piraeus. As he explained, the importance of foreign investments in Greece like the one of COSCO is critical.For his part, Prime Minister of China Li Keqiang sent the following congratulatory message: ‘China highly values its relations with Greece and hopes that through joint efforts with Greece, the Piraeus port will be turned into a first-class port in the Mediterranean Sea and a vital hub of the region, and on that basis, the building of the China-Europe Land-Sea Express Line will be accelerated. By so doing, we will move China-Greece practical cooperation steadily forward and deliver even greater benefits to our two countries and peoples. China and Greece are enjoying all-round and rapid development of bilateral relations. Our political mutual trust is growing, and our practical cooperation is yielding new results. Our cooperation on the Piraeus port, in particular, has set a fine example.’ 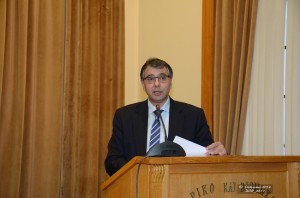 New construction works will start following a recent agreement between Piraeus Port Authority and COSCO which was ratified in the Hellenic Parliament. According to Piraeus Container Terminal S.A. the new investment will be worth of 230 million EUR creating 200 new job positions in the construction process and 800 permanent ones following the completion of works.On the occasion of the inauguration of the works’ beginning for the extension of Pier III at the port of Piraeus, President of the Commercial and Industrial Chamber of Piraeus, Vassilis Korkidis said on chinaandgreece.com: ‘Our vision for the Piraeus port is for it to become the most important hub, where products will arrive from the East, will be processed and forwarded to the major markets of Europe and Eastern Europe. According to the European Commission, the global logistics industry output is nowadays estimated to be approximately 5.4 trillion or 13.8% of the world GDP. The Mediterranean ports handle about 50% of the European market goods. For our country in particular, COSCO starts its expansion projects in the western part of Pier III which constitutes a significant new investment of 230 million EUR. This investment will increase the capacity of the container terminal to 6.2 million TEU. Overall benefits to the economy are straightforward’.