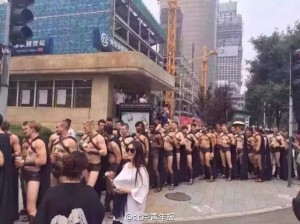 Dozens of muscular male foreigners dressed as Spartans were detained by Beijing police during the week. They were accused of disturbing public order in Sanlitun, one of Beijing’s hot hubs for entertainment. Photos posted online showed a group of foreigners wearing Spartan-like jock straps and capes marching through the streets while holding small boxes of food in their hands. Lined up in a pyramid-like formation at times, they traveled around central Beijing to promote a new restaurant product in Guomao subway station, overhead bridges in Sanlitun and Jianwai SOHO in Beijng’s CBD.