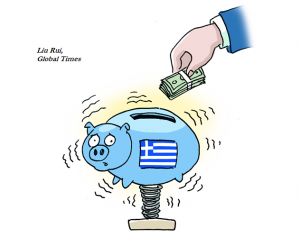 Greece has been the epicenter of international attention for weeks. The concern of a potential exit of the country from the eurozone – and possibly from the EU – was high not only in Europe but across the world. China was no exception. Although a long way away, a Greek fall could immediately cause instability to the world economy, possibly worsening China’s own stock turmoil. The globalized structure of the world economy could simultaneously face two different crises, a combination that might generate unknown consequences.

In parallel with the stock market volatility, China is highly interested in the future of its investments in Greece. According to Chinese Commerce Ministry spokesman Shen Danyang, China has invested $1.3 billion, concentrated in shipping and telecommunications. Although this figure is not particularly high, a potential return of Greece to a new drachma could lead to economic losses due to the immediate default, the devaluation of the new currency and the subsequent limited demand.

Economic losses might be worsened with a new wave of uncertainty regarding the course of future investments in Greece with the context of necessary privatization. COSCO, for instance, is one for the three bidders for the Piraeus Port Authority and offers will be submitted by the end of October. Additionally, other Chinese companies are interested in Greek construction, real estate, energy and the exploration of rare earth minerals.

Greece is an important part of the implementation of the “One Belt, One Road” initiative. Although some critics suggest that China and other foreign investors might benefit in the long term, being able to invest at lower prices with the new drachma, this option is unrealistic. No prediction can be made about long-term developments. That is because the return of Greece to its national currency would not be a deliberate economic choice with clear objectives and straightforward timetables, but a compulsory and involuntary decision. Therefore, the instability to follow the break of Greece’s relations with the EU and the freeze of liquidity from the European Central Bank is not predictable. The social dimension overshadows a pure economic analysis.

In the case of a Grexit and within an ethnocentric and anti-foreigner atmosphere, the environment might not be friendly for investors. These investors would naturally have to examine alternatives away from Greece. COSCO, for example, could consider investing in other European ports, for example in Italy or Romania. But such a decision might be time-consuming and hard to be implemented. COSCO has benefited by its investment in Piraeus since 2009 and will risk to reconsider its successful strategy under unfavorable conditions.

But it now seems that the worst-case scenario has been averted. The “Agreekment” of July 12 2015, as President of the European Council Donald Tusk characterized the recent Euro Summit Statement on Greece, gives hope for a breakthrough in the next few years and a final solution of the Greek crisis.

Although the Grexit fear is not eliminated, the country has a unique opportunity to carry out structural reforms and deliver under the EU and IMF umbrella. Under current circumstances, Chinese companies can still enjoy safe investment conditions. The immediate impact of the new bailout will be the new taxation policy the Greek government has accepted. Accordingly, corporate taxes will increase from 26 percent to 29 percent. Although this change is not welcomed by companies, it does not constitute a prohibitive factor in their investment policy as it only partly reduces their profits.

Looking toward the future, China should carefully monitor development in Greece. The main sentiment in most European countries, principally in Germany, is that the new bailout will be the last effort to keep the country in the eurozone. Taking into account that the path toward recovery will be difficult, a long political crisis might jeopardize the change for reforms to be implemented.

On the other hand, however, it is the first time since the beginning of the crisis in October 2009 that optimism can prevail. Alexis Tsipras, a prime minister with no experience in governing and no responsibility for the explosion of public debt, has landed into reality acknowledging his mistakes. Populism has also suffered a serious blow because the illusion of other financing alternatives has collapsed. Greece’s partners, including China, will help Athens in its new reform task. It is difficult. But doable.