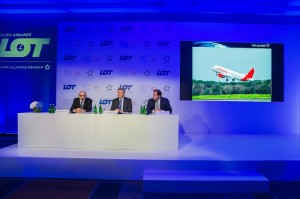 Star Alliance member carrier LOT Polish Airlines hosted the mid-year Chief Executive Board (CEB) Meeting during which the member carrier CEOs endorsed enhancements to further improve the network travel experience offered to customers and gave the go-ahead for the inclusion of a new member in Brazil. As hosting carrier, LOT outlined its new strategy – a new LOT in a new Europe – under which it plans to double in size over the next five years. In addition to three new connections to Asia – Tokyo, Seoul and Bangkok – it plans more than a dozen new European routes. Announcing the most dynamic growth in the company’s history, LOT said it was competing for leadership in the region and aimed to become the largest network carrier in New Europe.

In their joint discussions, the CEOs reaffirmed the objectives set out by the Alliance’s founding fathers more than 18 years ago, agreeing to continue to build on its key strengths – a global network, a high standard of customer service and making use of modern technology to drive business strategies.Star Alliance’s aim at launch in May 1997 was to become the leading global airline alliance for the high value international traveller and contribute to the long-term profitability of its member airlines beyond their individual capabilities. “As a mature Alliance with a comprehensive network and good, close relationships between our member airlines we are excellently placed to offer continuous enhancements in various ways that together improve the Alliance travel experience,” said Star Alliance CEO Mark Schwab.

Avianca in Brazil will be added to the network as of July 22nd this year, allowing Star Alliance once again to offer its customers domestic flights in Latin America’s largest and most important market. “We are delighted that we can include Avianca in Brazil as of next month, which, together with various new hub-to-hub services announced by individual members, signifies that we will boost network connectivity this year,” Schwab added. 2015 has already seen a steady stream of route additions and more new routes will be introduced by the end of the year. These include for example further increasing choice at the Alliance’s Houston hub, with new long-haul flights by Air New Zealand, ANA and EVA Air from Auckland, Tokyo and Taipei. Air China has launched a new flight between Beijing and Montreal while Air Canada will start flying from Toronto to Delhi in December. A new Lufthansa flight from Frankfurt to Panama will establish an important link between a major hub in Europa and Latin America from late November.

In parallel to this organic network growth, the Alliance continues to monitor market developments and will seize opportunities for membership expansion if and when they arise. With customer service improvement at the very heart of its activities, the member airlines are continuously looking for joint initiatives that will deliver a better experience – in many cases by introducing new behind the scenes technology to improve transactions between the carriers. The most recent example of how such background changes can bring visible change for customers is demonstrated by Star Alliance’s award- winning home in London Heathrow Terminal 2, now one year old. The Queen’s Terminal, formally opened on June 23rd, 2014 by H.M. Queen Elizabeth II, uses new technology and processes that allow airlines to work together in its check-in hall, providing a highly automated and efficient service. Customer feedback on the new terminal has been extremely positive.

Dialogue with airports is essential in realising ground service improvements. “We would ask airports around the world to engage with us at a very early stage, as they redevelop terminals or build completely new infrastructures. As the experience at Heathrow shows, this can bring advantages for all,” Schwab said. Projects are already under way at Sao Paulo – Guarulhos Airport as well as at Tokyo’s Narita Airport. In both cases the check-in halls face space constraints which cannot be resolved by expanding the current infrastructure.

Another service which is currently being rolled out across the network is Gold Track Security – a dedicated security lane for First and Business Class passengers as well as Star Alliance Gold Card holders. This Alliance product is currently available at over 25 major airports and will progressively expanded to the majority of Star Alliance hubs during the course of the year.

The CEOs also reviewed the successful implementation of several new IT systems. These use latest technologies to provide a more reliable and faster service, with better reporting systems in place to diagnose any errors and allow them to be quickly fixed. An IT hub infrastructure forms the backbone for the majority of the systems required to deliver the Alliance customer promise. This has gradually being extended to handle different forms of business logic and further similar projects will follow. Examples to date include through check-in: which allows passengers to receive their boarding passes for their entire trip from the first point of check-in. Last year saw the introduction of two systems in the field of loyalty programmes.

The one allows faster and better exchange of the frequent flyer data, with the aim of all but eliminating the need to manually claim miles after a flight. The other system ensures the faster communication of status changes across all airlines in the Alliance, allowing customers to make use of their Gold benefits even before a new card is issued. Schwab said: “Connecting the data networks is just as important as offering ideal flight options as part of our Airline’s schedule. Having our IT Hub infrastructure in place puts us into a unique position to provide the necessary IT technological support required for speedy implementations of new Star Alliance customer benefits.”

In closing, the CEOs reiterated that while adding new members to the Alliance no longer is of the same importance as some years ago, the Alliance business model continues to offer many opportunities for creating additional value for their individual companies. As a consequence, Alliance membership remains an important and integral part of individual member’s business plans, with each airline being able to decide how much value they wish to extract from their Alliance membership.